Kids Encyclopedia Facts
Not to be confused with Scorpionidae.

The Scorpaenidae (also known as scorpionfish) are a family of mostly marine fish that includes many of the world's most venomous species. As their name suggests, scorpionfish have a type of "sting" in the form of sharp spines coated with venomous mucus. The family is a large one, with hundreds of members. These belong to the higher taxon of Actinopterygii (ray-finned fish). They are widespread in tropical and temperate seas, but mostly found in the Indo-Pacific. They should not be confused with the cabezones, of the genus Scorpaenichthys, which belong to a separate, though related, family, Cottidae. 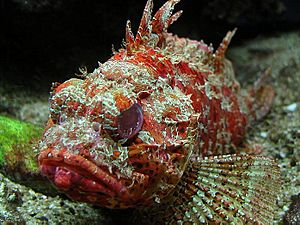 Some types, such as the lionfish, are attractive as well as dangerous, and highly desired for aquaria. In addition to the name scorpionfish, informal names for family members include firefish, turkeyfish, dragonfish, and stingfish, usually with adjectives added.

Most species are bottom-dwellers that feed on crustaceans and smaller fish. Many inhabit shallow waters, but a few live as deep as 2,200 m (7,200 ft). Most scorpionfish, such as the stonefish, wait in disguise for prey to pass them by before attacking, while lionfish often ambush their prey. When not ambushing, lionfish may herd the fish, shrimp, or crab into a corner before swallowing. Like many perciform fishes, scorpionfish are suction feeders that capture prey by rapidly projecting a suction field generated by expansion of the fish's buccal cavity.

The Scorpaenidae, which became popular because of the specimens found within it, is composed of smaller families. These are the Scorpaeninae (scorpionfishes), Sebastinae (rockfishes), and Pteroinae (lionsfishes or turkeyfishes); this last one being the one in which the previously mentioned lionfish belongs to.

Scorpaenid systematics are complicated and unsettled. Fishes of the World recognizes 10 subfamilies with a total of 388 species, while (as of 2018[update]) FishBase follows Eschmeyer and has three subfamilies, 25 genera, and 222 species.

All content from Kiddle encyclopedia articles (including the article images and facts) can be freely used under Attribution-ShareAlike license, unless stated otherwise. Cite this article:
Scorpaenidae Facts for Kids. Kiddle Encyclopedia.