Synanceia is a genus of fish of the family Synanceiidae, the stonefish, whose members are venomous, dangerous, and even fatal to humans. They are the most venomous fish known. They are found in the coastal regions of the Indo-Pacific.

The type species of the genus is Synanceia verrucosa, which includes the species Synanceia horrida that Linnaeus described as Scorpaena. The misspelling Synanceja is regarded as a synonym for this genus. 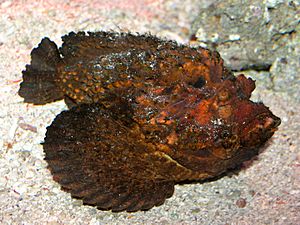 Synanceia verrucosa in a public aquarium

The following is a list of species in the genus:

Synanceia are primarily marine, though some species are known to live in rivers. Its species have potent neurotoxins secreted from glands at the base of their needle-like dorsal fin spines which stick up when disturbed or threatened. The vernacular name of the species, the stonefish, derives from its grey and mottled camouflage similar to the color of a stone. Swimmers may not notice them and inadvertently step on them, triggering a sting. When the stonefish is disturbed, it may inject an amount of venom proportional to the amount of pressure applied to it.

A study published in 2018 reports that stonefish also have the ability to extend a sharp, specialized spine known as a lachrymal saber as an additional defense mechanism.

The venom of Synanceia is potent and can result in cellular deterioration of the afflicted organism due to toxins that target cellular membranes. The venom can also lower white blood cell count and lead to infection of the area even after appropriate treatment of the wound.

Stonefish stings are extremely painful and potentially lethal. The two most recommended treatments are the application of heat to the affected area, and antivenom. Hot water (at a temperature no higher than 45 °C (113 °F)) applied to the injured area has been found to denature stonefish venom, and causes minimal discomfort to the victim. Antivenom is used in more extreme cases. Vinegar is found on some Australian beaches as it is said to lessen the pain.

The stonefish is one of the most venomous fish in the world and stings can cause death if not treated. Most stonefish stings occur as a result of stepping on the creature which forces venom into the foot, while it is less common for the fish to sting when it is picked up. Stonefish stings can occur on the beach, not just in the water, since stonefish can survive out of the water for up to 24 hours. They are not easily seen as they look similar to rocks or coral. Stonefish antivenom is the second-most administered in Australia.

Some Indigenous Australians have corroborees which involve re-enacting the death of someone who trod on the fish. The Aboriginal people of Northern Australia and the Great Barrier Reef have ways of preparing the fish for eating to avoid poisoning.

After stonefish envenomation the amount of anti-venom given depends on the number of puncture wounds from the stonefish spines. 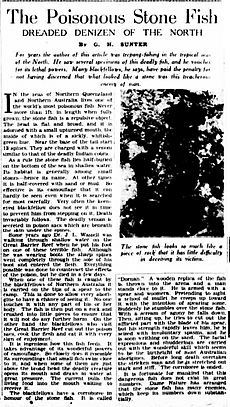 1936 article from Melbourne newspaper The Argus about venomous stonefish.

There were 25 cases of the use of antivenom for stonefish reported to Commonwealth Serum Laboratories for a one-year period between July 1989 and June 1990, with most from Queensland and four from the Northern Territory. There were 14 calls to the Queensland Poisons Information System in 2008 regarding stonefish poison.

Synanceia is edible to humans if properly prepared. The protein-based venom quickly breaks down when heated, and raw stonefish served as part of sashimi is rendered harmless simply by removing the dorsal fins which are the main source of venom. The fish are considered a delicacy in many parts of Asia, including south Japan, south Fujian, Guangdong in China, and Hong Kong. In the Hokkien-speaking area, they are considered delicacies and good for health. The meat of Synanceia is white, dense and sweet, and the skin is also edible. They are usually cooked with ginger into a clear soup, and sometimes served raw as sashimi.

All content from Kiddle encyclopedia articles (including the article images and facts) can be freely used under Attribution-ShareAlike license, unless stated otherwise. Cite this article:
Synanceia Facts for Kids. Kiddle Encyclopedia.