Ripley's Aquarium of Canada is a public aquarium in Toronto, Ontario, Canada. The aquarium is one of three aquariums owned and operated by Ripley Entertainment. It is located in downtown Toronto, just southeast of the CN Tower. The aquarium has 5.7 million litres (1.25 million gallons) of marine and freshwater habitats from across the world. The exhibits hold more than 20,000 exotic sea and freshwater specimens from more than 450 species. 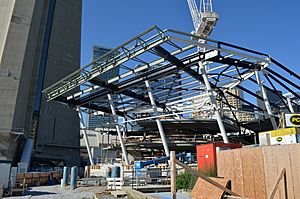 Ripley's Aquarium a year into construction in August 2012.

A Ripley's Aquarium was originally planned in 2004 to be built in Niagara Falls, Ontario, next to what is now Great Wolf Lodge around 2007, but plans fell through and Ripley's eventually relocated to Toronto. Construction began on the attraction in August 2011 with a final cost approaching $130 million. The aquarium opened to the public in October 2013.

The project was a partnership with three levels of government. The federal government's Canada Lands Company contributed $10 million to the project to develop the "John Street Corridor" linking Front Street with the aquarium, the CN Tower and the Rogers Centre. The Government of Ontario contributed $11 million to the project, and the City of Toronto government provided property-tax incentives amounting to between $8 million and $12 million over the first twelve years of the aquarium. 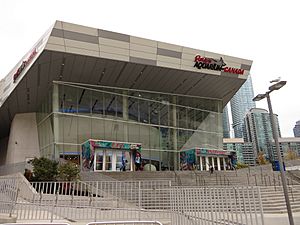 The roof of the main entrance was designed to give the illusion of the Earth's crust peeling away to reveal a window into the aquatic world.

The building features a multi-faceted shell clad in large aluminum panels, with the roof of the main entrance that "gives the illusion of the earth’s crust peeling away to reveal a window into the aquatic world." There are also coloured surfaces that juxtapose reflective aluminum soffits. The building was designed with special shielding so that sharks would not be disturbed by its electrical systems.

The building is located on Bremner Boulevard, to the east of the Rogers Centre, just south of the CN Tower and across the street from the Roundhouse Railway Museum. The aquarium is accessible from the Union subway station using the SkyWalk pedestrian pathway. The building does not have parking of its own. Parking is available in several underground parking garages nearby and surface parking lots. The nearest highway access is the Gardiner Expressway by exiting at York Street.

The aquarium holds 5.7 million litres (1.5 million gallons) of water and shows marine and freshwater habitats from around the world. The aquarium is organized into ten galleries: Canadian Waters, Rainbow Reef, Dangerous Lagoon, Discovery Centre, The Gallery, Ray Bay, Swarm: Nature by Numbers, Planet Jellies, Life Support Systems and the Shoreline Gallery. It is home to more than 20,000 animals. 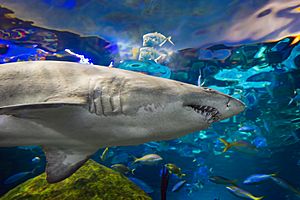 All content from Kiddle encyclopedia articles (including the article images and facts) can be freely used under Attribution-ShareAlike license, unless stated otherwise. Cite this article:
Ripley's Aquarium of Canada Facts for Kids. Kiddle Encyclopedia.