Aurelia is a genus of scyphozoan jellyfish, commonly called moon jellies. There are at least 13 species in the genus Aurelia including many that are still not formally described. It has been suggested that Aurelia is the best-studied group of gelatinous zooplankton, with Aurelia aurita the best-studied species in the genus; two other species, Aurelia labiata and Aurelia limbata have also been investigated (studies summarized by Arai).

Since most previous studies of Aurelia were done without the benefit of genetic identification, one cannot positively attribute the results of most research to the species named. Species of Aurelia can be found in the Atlantic Ocean, the Arctic Ocean and the Pacific Ocean, and are common to the waters off California, northern China, Japan, Korea, Australia, New Zealand, the Black Sea, Indonesia, the eastern coast of the United States as well as Europe.

Aurelia undergoes alternation of generations, whereby the sexually-reproducing pelagic medusa stage is either male or female, and the benthic polyp stage reproduces asexually. Meanwhile, life cycle reversal, in which polyps are formed directly from juvenile and sexually mature medusae or their fragments, was also observed in Aurelia sp.1. The genus was first described in 1845 by Jean-Baptiste Lamarck in his book Histoire Naturelle des Animaux sans Vertebres (Natural History of Invertebrates).

Aurelia have a wide range of marine environments and have been found along coastal regions between 70 degrees north to 55 degrees south. They are often considered to be the most widely distributed genus of jellyfish. The species A. aurita tends to live in all oceanic areas other than the northern arctic where-as its counterpart, A. labiata inhabits the northern polar regions of the ocean. The ability for Aurelia to adapt to a large range of temperatures and salinities may show a flexibility in their ecology and life history that allowed them to adapt to these variations throughout their evolution. However, many live along the coast in temperate climates and around coastal environments where it is safer for the polyps to develop. As the temperature of the water increases, whether with global warming or seasonal, the number of medusae increases as well as the ratio of polyps to medusae. Without the influence of wind and water currents, Aurelia live alone, however, they are thought to be brought together into aggregations as a result of wind and water currents. With all of the variability from their environments, the medusae of Aurelia are able to “de-grow” which allows them to cheat death in a way until proper conditions are met in order to survive by becoming a smaller medusa. 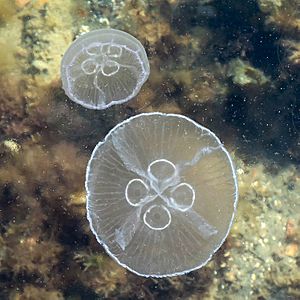 There is a debate around exactly how many species of Aurelia there are. There have been many studies done to accurately determine the just how many species and subspecies of Aurelia there are. Some have used DNA evidence from both mitochondrial and nuclear ribosomal DNA in order to accurately depict this number. According to one study there are 16 different species of moon jellyfish and another suggests there are only 12 and yet another suggests that Aurelia is a polyphyletic clade, a group of organisms that are grouped together but do not share a common ancestor, and that there are 13 species. However, collectively it is agreed that there are two specifically recognized species of Aurelia: A. aurita and A. labiate, along with some subspecies.

The differing appearances of moon jellyfish is what has made them so hard to identify. They tend to have a variety of different sizes, however, they typically range from 5–38 cm (2.0–15.0 in) in diameter with an average of 18 cm (7.1 in) wide and 8 cm (3.1 in) in height. The polyps of these jellyfish can grow to 1.6 cm (0.63 in) tall and their ephyrae, the larval form of the jellyfish, have an average diameter of 0.4 cm (0.16 in). The adult medusae are typically translucent in color but the color of their gut can change based on what they eat; for example, if they eat crustaceans, they can have a pink or lavender tint to them and if they were to eat brine shrimp, the tint would be more of an orange color. A. aurita typically have shorter tentacles in the middle of the bell shape, other than the longer ones that are on the circumference of the bell, with cilia – small hair-like structures – on them in order to sweep prey towards the edge of the bell where there is a mucous layer and oral arms. A. labiata have just the opposite, where the oral arms are longer than their bell tentacles. Their polyps can have up to twenty-two tentacles to help with feeding and other necessary activities. 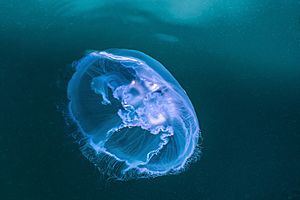 The diet of Aurelia is similar to that of other jellyfish. They primarily feed on zooplankton. They store their prey in special pouches until they are ready to eat it and use their four oral arms to bring it to the mouth. However, their feeding can cause economic issues. They commonly either prey on or compete with the commercial fisheries and their larvae as well as cause several issues for trawling boats such as loss of revenue due to lost fishing time and bycatch, damage done to gears in the boats and the equipment, and having to relocate due to large aggregations.

They are able to sense light and dark and sense up and down using statocysts around the bell. After many tests on frogs, it was determined that A. aurita has a proteinaceous venom that causes muscle twitching by inducing the irreversible depolarization of the muscle membrane that is believed to be caused by an increase in the membrane’s permeability to sodium ions. 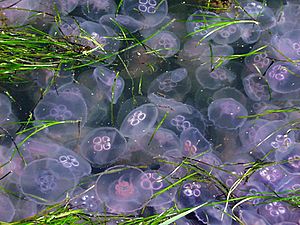 The reproduction of Aurelia has been studied extensively by scientists. The medusa stage of the jellyfish reproduce sexually. The males release strings of sperm and the females ingest them. Once the ciliated larvae develop from the egg, they settle on or near the sea floor and develop into benthic polyps. The polyps can alternate between reproductive phases and feeding phases for up to twenty-five years. The polyps then reproduce asexually and bud into ephyrae which later turn into medusa. However, Aurelia typically reproduce when there are too many nutrients in the surrounding waters.

All content from Kiddle encyclopedia articles (including the article images and facts) can be freely used under Attribution-ShareAlike license, unless stated otherwise. Cite this article:
Aurelia (cnidarian) Facts for Kids. Kiddle Encyclopedia.