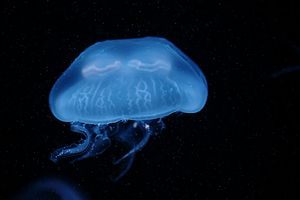 Aurelia labiata in the Vienna Zoo

Aurelia labiata is a species of moon jellyfish. It is a cnidarian in the family Ulmaridae. It is typically larger than Aurelia aurita, with individuals document up to 45cm. However much of its size range overlaps with A. aurita (up to 40cm), making size an imperfect diagnostic tool. Most Aurelia labiata have a 16-scalloped bell, meaning the bell indents inward at 16 points. 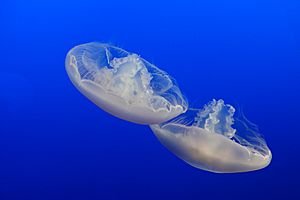 Aurelia labiata typically range in the northern Pacific Ocean. Their range stretches from the west coast of California to the eastern coast of Japan. They are known to swarm in large numbers, sometimes with their relatives Aurelia aurita.

The Aurelia labiata have adaptive behaviors that include directional and vertical swimming. Directional swimming helps them escape from predators, approach to a food source, and swim through turbulence. Vertical swimming allows them to avoid rocky walls and low salinity. These behaviors come from their sensory receptors and nervous system that allows better mobility for their survival.

Aurelia labiata are fed upon by other cnidarians such as Phacellophora camtschatica and Cyanea capillata. Like many jellyfish, they are also consumed by sea turtles which are immune to their stings.

All content from Kiddle encyclopedia articles (including the article images and facts) can be freely used under Attribution-ShareAlike license, unless stated otherwise. Cite this article:
Aurelia labiata Facts for Kids. Kiddle Encyclopedia.