It can reach a body length of 64 cm (25 in), and a mass of over 20 kilograms (44 lb), making it not only the heaviest crustacean in the world, but also the heaviest of all living arthropod species. Its closest relative is the European lobster, which can be distinguished by its coloration. American lobsters are usually bluish green to brown with red spines, but several color variations have been observed. 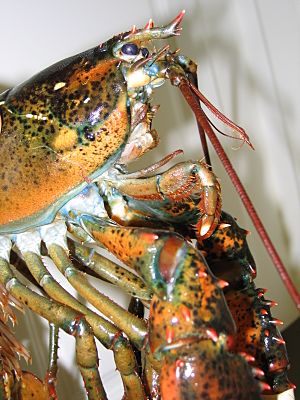 Profile of the anterior part of an American lobster

Homarus americanus is distributed along the Atlantic coast of North America, from Labrador in the north to Cape Hatteras, North Carolina in the south. South of New Jersey, the species is uncommon, and landings in Delaware, Maryland, Virginia and North Carolina usually make up less than 0.1% of all landings.

A fossil claw assigned to Homarus americanus was found at Nantucket, dating from the Pleistocene. In 2013, an American lobster was caught at the Farallon Islands off the coast of California. 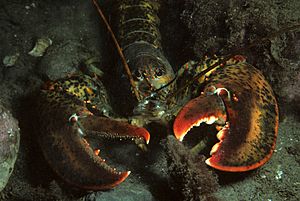 The longest American lobsters have a body (excluding claws) 64 cm (25 in) long. According to Guinness World Records, the heaviest crustacean ever recorded was an American lobster caught off Nova Scotia, Canada, weighing 44.4 lb (20.1 kg). 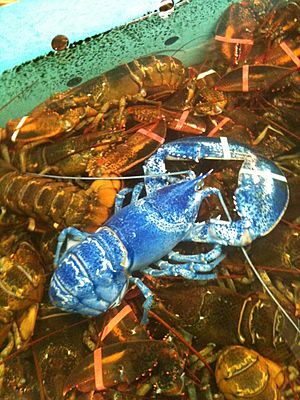 The first pair of pereiopods (legs) is armed with a large, asymmetrical pair of claws. The larger one is the "crusher", and has rounded nodules used for crushing prey; the other is the "cutter", which has sharp inner edges, and is used for holding or tearing the prey.

The American lobster thrives in cold, shallow waters where there are many rocks and other places to hide from predators. It typically lives at a depth of 4–50 m (13–164 ft), but can be found up to 480 m (1,570 ft) below the surface.

The antennae measure about 2 in (51 mm) long and split into Y-shaped structures with pointed tips. Each tip exhibits a dense zone of hair tufts staggered in a zigzag arrangement. These hairs are covered with multiple nerve cells that can detect odors. Larger, thicker hairs found along the edges control the flow of water, containing odor molecules, to the inner sensory hairs. 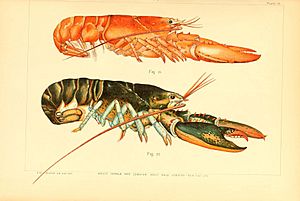 The shorter antennules provide a further sense of smell. By having a pair of olfactory organs, a lobster can locate the direction a smell comes from, much the same way humans can hear the direction a sound comes from. In addition to sensing smells, the antennae can judge water speed to improve direction finding.

Lobsters have two urinary bladders, located on either side of the head. Lobsters use scents to communicate what and where they are, and those scents are in the urine. They project long plumes of urine 1–2 meters (3 ft 3 in–6 ft 7 in) in front of them, and do so when they detect a rival or a potential mate in the area. 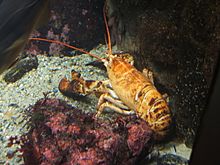 The normal coloration of Homarus americanus is "dark bluish green to greenish brown," redder on the body and claws, and greener on the legs. This coloration is produced by mixing yellow, blue, and red pigments. Despite the rarity of strangely colored lobsters, many more of them are reported being caught.

An estimated 1 in 2 million lobsters are blue. A genetic mutation causes a blue lobster to produce an excessive amount of a particular protein.

Yellow lobsters are the result of a rare genetic mutation and the odds of finding one are estimated to be 1 in 30 million.

In July 2010, an albino lobster was reportedly caught in Gloucester. An estimated only 1 in 100 million lobsters is albino, entirely lacking in colored pigments.

Red lobster coloration is a typical result of cooking. There is a 1 in 10 million chance of catching a live red lobster. 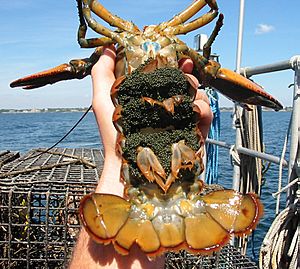 A female lobster carrying eggs on her pleopods

Mating only takes place shortly after the female has molted, and her exoskeleton is still soft. The female releases a pheromone which causes the males to become less aggressive and to begin courtship, which involves a courtship dance with claws closed.

The female releases eggs then they are then attached to the female's pleopods (swimmerets) using an adhesive, where they are cared for until they are ready to hatch. The female cleans the eggs regularly, and fans them with water to keep them oxygenated, this period lasts 10–11 months. 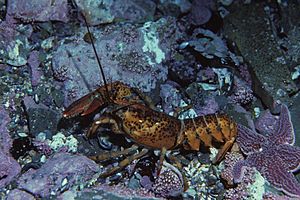 The developing embryo passes through several molts within the egg, before hatching as a metanauplius larva. When the eggs hatch, the female releases them by waving her tail in the water, setting batches of larvae free.

The metanauplius is 1⁄3 in (8.5 mm) long, transparent, with large eyes and a long spine projecting from its head. It quickly molts, and the next three stages are similar, but larger. These molts take 10–20 days, only 1 in 1,000 is thought to survive to the juvenile stage.

To reach the fourth stage the larva undergoes metamorphosis, and shows a much greater resemblance to the adult lobster, is around 1⁄2 in (13 mm) long, and swims with its pleopods. At this stage, the lobster's claws are still relatively small so they rely primarily on tail-flip escapes if threatened. 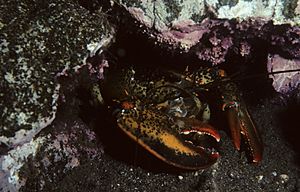 After the next molt, the lobster sinks to the ocean floor, and adopts a benthic lifestyle. It molts more and more infrequently, from an initial rate of ten times per year to once every few years. After one year, it is around 1–1.5 in (25–38 mm) long, and after six years, it may weigh 1 pound (0.45 kg).

By the time it reaches the minimum landing size, an individual may have molted 25–27 times, and thereafter each molt may signal a 40%–50% increase in weight. If threatened, adult lobsters will generally choose to fight unless they have lost their claws. 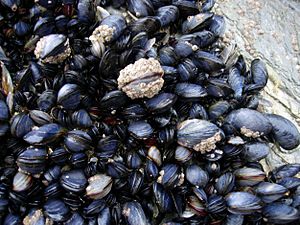 Mussels are a big part of the lobsters diet

The natural diet of H. americanus is relatively consistent across different habitats. It is dominated by mollusks (especially mussels), echinoderms and polychaetes, although a wide range of other prey items may be eaten, including other crustaceans, brittle stars and cnidarians.

Lobsters in Maine have been shown to gain 35-55% of their calories from herring, which is used as bait for lobster traps. Only 6% of lobsters entering lobster traps to feed are caught. 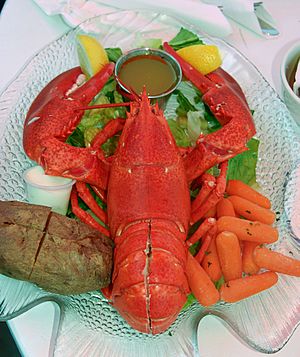 American lobsters are a popular food. They are commonly boiled or steamed. Hard-shells (lobsters that are several months past their last molt) can survive out of water for up to four or five days if kept refrigerated. Soft-shells (lobsters that have only recently molted) do not survive more than a few hours out of water. Lobsters are usually cooked alive, which may be illegal in certain areas and which some people consider inhumane.

One common way of serving lobster 'tail' (actually the abdomen) is with beef, known as surf and turf. Lobsters have a greenish or brownish organ called the tomalley, which, like the liver and pancreas in a human, filters out toxins from the body. Some diners consider it a delicacy, but others avoid it because they consider it a toxin source or dislike eating innards.

Eating a lobster can get messy, and most restaurants offer a lobster bib. Meat is generally contained in the larger claws and tails, and stays warm quite a while after being served. There is some meat in the legs and in the arms that connect the large claws to the body.

All content from Kiddle encyclopedia articles (including the article images and facts) can be freely used under Attribution-ShareAlike license, unless stated otherwise. Cite this article:
American lobster Facts for Kids. Kiddle Encyclopedia.