The Dallas World Aquarium is a for-profit aquarium and zoo located in the West End Historic District of downtown Dallas, Texas, USA. It aids conservation and education by housing many animals that are threatened or endangered as part of a cooperative breeding program with other zoos around the world. It has been an accredited member of the Association of Zoos and Aquariums since 1997, and is a member of the World Association of Zoos and Aquariums.

The aquarium was opened in October 1992 in an old 1924 warehouse that had been gutted and rebuilt on the inside. In 1997, "The Orinoco - Secrets of the River" opened in an adjacent warehouse that had been similarly gutted and transformed, and the alley between the two buildings became the divide between freshwater and saltwater exhibits. In May 2000, it purchased a vacant lot behind the original warehouse for its first new construction, the Mundo Maya exhibit, which opened in August 2004. In 2015 Ben Crair of the New Republic wrote an exposé exposing the darker side of the zoo. 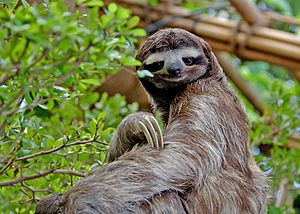 The upper level of the aquarium is an artificial reproduction of the Orinoco Rainforest. The rainforest is an aviary, with birds such as scarlet ibis and toucans flying freely. While winding their way through the rainforest, visitors see the only public display of three-toed sloths and Antillean manatees in the United States, plus animals such as electric eels, caecilians, tamarins, poison dart frogs, Orinoco crocodiles, and vampire bats.

The lower level houses aquaria featuring fish, sea anemones, coral, jellyfish, and other sea animals from around the world. The 10 main tanks feature the aquatic life of Japan, Indonesia, Sri Lanka, British Columbia, the Bahamas, Fiji, Palau, Southern Australia, Lord Howe Island, and the Solomon Islands. Other tanks on display include a large tank with a 40-foot (12 m) tunnel where visitors can observe fish of the continental shelf swimming around them.

The aquarium is also part of a joint initiative between local companies and corporations and the Dallas Public School district. Many of its employees are also full-time students at the School of Business and Management at the Yvonne A. Ewell Townview Magnet High School. This joint venture, as part of a work-study program by the school, emphasizes real-world business techniques and practices to teach the upcoming generation on maintaining and running the day-to-day operations of one of the city's largest and most well-known attractions.

All content from Kiddle encyclopedia articles (including the article images and facts) can be freely used under Attribution-ShareAlike license, unless stated otherwise. Cite this article:
Dallas World Aquarium Facts for Kids. Kiddle Encyclopedia.