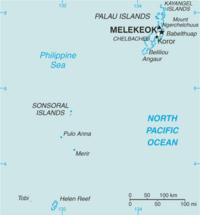 Palau, officially the Republic of Palau, is an island nation. It is in the Pacific Ocean. Palau is 300 miles (500 km) east of the Philippines. It got independence from United Nations trusteeship administration (administered by the United States of America) in 1994. It is one of the world's youngest and smallest nations. It is sometimes referred to in English under its native name Belau. The capital city of Palau is Melekeok. This has been true since October 1, 2006. 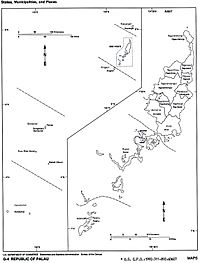 The sixteen states of Palau

Palau has a tropical climate all year round. Average yearly temperature is around 82 °F (27 °C).

All content from Kiddle encyclopedia articles (including the article images and facts) can be freely used under Attribution-ShareAlike license, unless stated otherwise. Cite this article:
Palau Facts for Kids. Kiddle Encyclopedia.