Peleliu (or Beliliou) is an island in the island nation of Palau. Peleliu, along with two small islands to its northeast, forms one of the sixteen states of Palau. The island is notable as the location of the Battle of Peleliu in World War II.

First sighting of Peleliu, Babeldaob, and Koror recorded by Westerners was by the Spanish expedition of Ruy López de Villalobos at the end of January 1543. They were then charted as Los Arrecifes ("The Reefs" in Spanish). In November and December 1710 these three islands were again visited and explored by the Spanish missionary expedition commanded by Sargento Mayor Francisco Padilla on board of the patache Santísima Trinidad. Two years later they were explored in detail by the expedition of Spanish naval officer Bernardo de Egoy. Following its defeat in the Spanish–American War, Spain sold Palau (including Peleliu) to Germany in 1899. Control passed to Japan in 1914.

During World War II, the Battle of Peleliu was a major battle between units of the United States Marine Corps and United States Army against the Imperial Japanese Army. The battle for the island was particularly brutal because by this time the Japanese military had evolved island defense tactics with strong fortifications in the island's caves and rock formations, which enabled a defense in depth which maximized casualties on the attacking force. On both sides involved in the fighting there were high losses with more than 2,000 Americans and 10,000 Japanese killed, but, remarkably, there were no casualties among the local civilians because they were evacuated from the fighting to other islands of Palau.

The ruins of many of the military installations of the era, such as the airstrip, are still intact, and shipwrecks from the battle remain visible underwater just off the coast. There are war memorials on the island to both the American and the Japanese dead. Peleliu and Angaur were the only islands in the Palau archipelago to be occupied by the Americans during the war. The capital of Koror remained in Japanese hands to the end of the war.

Peleliu was formally placed under the control of the United States under United Nations auspices in 1947 as part of the Trust Territory of the Pacific Islands. Palau became independent in 1978, and Peleliu was organized as a state within the new republic. In August 2014, Peleliu hosted the "leader's retreat" at the 45th Pacific Islands Forum, featuring representatives from the forum's 15 member states. 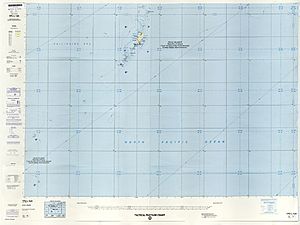 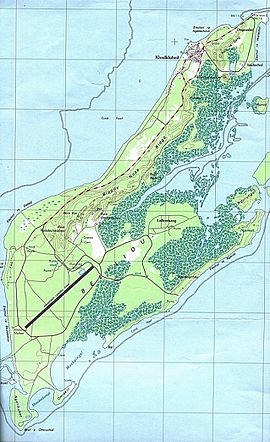 The state of Peleliu, with population of less than 500, has an elected chief executive, governor. The state also has a legislature elected every three years. The state population elects one of the members of the House of Delegates of Palau.

Peleliu Airfield, created by the Japanese in World War II, has the longest and widest runway in Palau (1,850 metres (6,070 ft)), but has been used only by small chartered aircraft after Palau's domestic flights were discontinued in late 2005. A regular boat service connects the island twice a week to Koror and Angaur. Travel time by boat from Koror is over an hour. The small harbor in the far north of the island is shallow and suitable only for yachts with shallow draft.

The entire island has been listed on the National Register of Historic Places as the Peleliu Battlefield, and has been designated a U.S. National Historic Landmark.

Peleliu Elementary School opened in 1946, and had its second building open in 1966, with the first still in use.

Palau High School in Koror is the country's only public high school, so children from this community go there.

All content from Kiddle encyclopedia articles (including the article images and facts) can be freely used under Attribution-ShareAlike license, unless stated otherwise. Cite this article:
Peleliu Facts for Kids. Kiddle Encyclopedia.