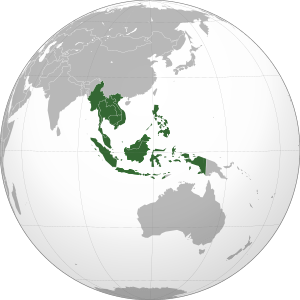 The Association of Southeast Asian Nations (ASEAN) is an international organization. On 8th August 1967, Malaysia, Thailand, Indonesia, Singapore, and the Philippines formed the ASEAN. At that time, communism was growing in Vietnam, and these five countries were also facing problems inside their own countries. In this background, these five countries created ASEAN as a show of common display of cooperation. In short, the purpose of the organization is political and economic cooperation. The organization is headquartered in Jakarta, Indonesia.

In 1976, the ASEAN countries held a conference in Bali. After this, these countries started closer economic cooperation. But, by the mid-1980s, the activities of the ASEAN had slowed down. By 1991, Thailand proposed a free trade area. The ASEAN countries meet every year to talk about many matters.

Some information about ASEAN countries is as follows:

The ASEAN holds a meeting every year. The meeting lasts for 3 days, and the members discuss many things.

All content from Kiddle encyclopedia articles (including the article images and facts) can be freely used under Attribution-ShareAlike license, unless stated otherwise. Cite this article:
Association of Southeast Asian Nations Facts for Kids. Kiddle Encyclopedia.