Sea Life Melbourne Aquarium is a Southern Ocean and Antarctic aquarium in central Melbourne, Australia. It is located on the banks of the Yarra River beside and under the Flinders Street Viaduct and the King Street Bridge. The attraction is a Sea Life Centre owned by Merlin Entertainments.

The current building was built between February 1998 and December 1999, the building was designed by Peddle Thorp architects to resemble a ship moored to the river, and opened in January 2000. The depth of the building however was designed not to be imposing at street level, and extends 7 metres (23 ft) below the surface. At its centre is a world first 2,200,000-litre (580,000 US gal) 'oceanarium in the round' where the spectators become the spectacle to the marine life swimming around them.

Soon after opening, the building had a legionnaires disease outbreak that resulted in 2 deaths and another 60 people being affected. Those affected had visited the aquarium between 11 and 27 April 2000. A damages action was brought in May 2000, ending in February 2004.

On 28 November 2008 Melbourne Aquarium officially opened after a significant expansion, also designed by Peddle Thorp, and now extends from the Yarra River to Flinders Street. A new entrance was built on the corner of Flinders and King Streets. The expansion features exhibits with king penguins and gentoo penguins, as well as many Antarctic fish, a first for Australia. The exhibits also feature real ice and snow to simulate Antarctic conditions, and take visitors on an expedition to Antarctica. The penguins were sourced from Kelly Tarlton's Underwater World in New Zealand.

In April 2013, Melbourne Aquarium's owners, Merlin Entertainments, announced that they would be spending $8 million on the refurbishment of the facilities. As part of the process, the aquarium will be rebranded as a Sea Life Centre and relaunched in September 2013.

The current Aquarium succeeded an earlier site in the Eastern annex of the Royal Exhibition Building, which burned down in 1953.

The Aquarium has a one-way self-guided tour, which is spread over four levels: 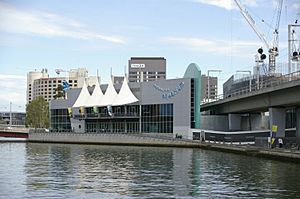 Sea Life Melbourne Aquarium view from the Queen's Bridge, before the rebranding

The aquarium is known for its main exhibit, the 2.2 million litre Mermaid Garden oceanarium, which features a grey nurse shark and sandbar whaler sharks, along with up to 2,000 marine creatures of diverse species.

In 2012, Merlin Entertainments, the global owner and operator of the Sea Life Centres brand as well as iconic brands such as Legoland and Madame Tussauds, purchased the Living and Leisure Group, then the owner-operators of the Melbourne Aquarium.

In late 2013, after an extensive $8 million investment and redevelopment by Merlin Entertainments, the aquarium relaunched under the Sea Life brand, joining up to 100 Merlin-owned attractions worldwide.

All content from Kiddle encyclopedia articles (including the article images and facts) can be freely used under Attribution-ShareAlike license, unless stated otherwise. Cite this article:
Sea Life Melbourne Aquarium Facts for Kids. Kiddle Encyclopedia.