Kelly Tarlton's Sea Life Aquarium (formerly Kelly Tarlton's Underwater World) is a public aquarium in Auckland, New Zealand, that was opened in 1985. Located at 23 Tamaki Drive, it was the brainchild of New Zealand marine archaeologist and diver Kelly Tarlton (1937–1985).

Built in disused sewage storage tanks, the aquarium used a new form of acrylic shaping, which allowed curved tunnels rather than viewing areas with flat panels only, as in previous aquariums. The project is also one of the first to use conveyor belts to slowly move people through the viewing areas.

In 1983, Kelly Tarlton proposed building an aquarium in unused sewage tanks underground on the Auckland waterfront. Fish would be viewed through a long acrylic tunnel.

The aquarium opened in 1985 after 10 months of construction. Tarlton developed a new method of building an acrylic tunnel by taking large sheets of clear acrylic, cutting them to size and heating them in an oven until they took the shape of the mould. Some of the sheets weighed over one tonne. Because of the refraction caused by light travelling through water, and the acrylic sheets used in the creation of the tunnel, the fish appear to be one third smaller than they are. 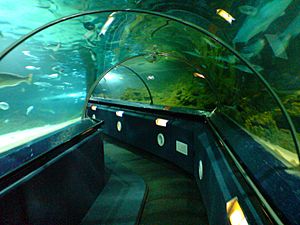 Tunnel at the aquarium

A 110-metre (360 ft) tunnel was created in sewage storage tanks that had been unused since the 1960s. The tanks are located below the suburb of Orakei, on Tamaki Drive and overlooking the Waitematā Harbour.

Once the tunnels were in place and the tanks filled to test for leaks (none were found) a seascape of caves and reefs was created using concrete before the basins were filled in one section with a careful selection of more than 1,800 marine creatures. Another section was filled with sharks (including bronze whaler, sevengill shark, wobbegong, school shark) and stingrays. The sharks are only held for a short period of time before being released back into the area where they were. In 1994 the facility was expanded to include a replica of the hut used by Captain Robert Falcon Scott on his tragic expedition to Antarctica, as well as a colony of Antarctic penguins in a climate controlled exhibit.

In December 2004 the aquarium opened Stingray Bay, which features a giant 350,000-litre (92,000 US gal) open topped tank that is 2.6 metres (8 ft 6.4 in) at its deepest point and constructed of crystal clear acrylic for optimum viewing.

In December 2010, Kelly Tarlton's received five new sand tiger sharks from the US.

In March 2012 Merlin Entertainments announced a $5.5 million upgrade introducing new exhibits, a new layout and a more interactive experience, due to open in September 2012. As part of the expansion the aquarium was rebranded Kelly Tarlton's Sea Life Aquarium, bringing it in line with Merlin Entertainments' global Sea Life Centres brand. The upgrade and rebranding was launched on 29 September 2012. 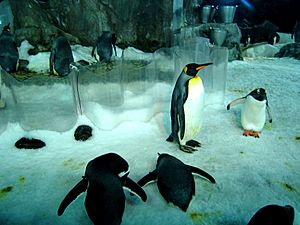 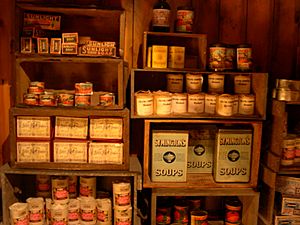 The aquarium's main features are the Antarctic Encounter and the Underwater World, but it also includes several other exhibits and several education rooms.

For a fee, visitors can join the fish in a Shark Cage encounter or cage-less shark encounter (Shark Dive Xtreme). Experienced dive professionals act as guides during these swims, and help ensure that the experience is safe.

All content from Kiddle encyclopedia articles (including the article images and facts) can be freely used under Attribution-ShareAlike license, unless stated otherwise. Cite this article:
Kelly Tarlton's Sea Life Aquarium Facts for Kids. Kiddle Encyclopedia.