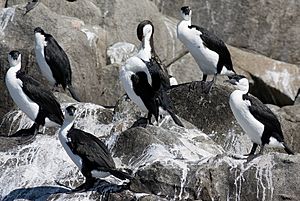 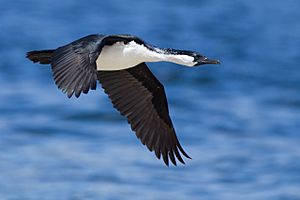 The black-faced cormorant (Phalacrocorax fuscescens), also known as the black-faced shag, is a medium-sized member of the cormorant family. Upperparts, including facial skin and bill, are black, with white underparts. It is endemic to coastal regions of southern Australia. 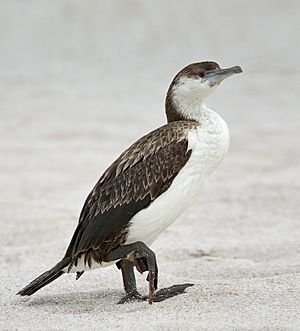 A black-faced cormorant with juvenile plummage.

Like other cormorant species, the black-faced cormorant is a large aquatic bird, with a long hooked bill, webbed feet, and monochromatic plumage. This is one of the largest cormorants found in south-western Australia and has pied plumage with the upper half of its body black and the undersides white. Its face is naked and black, hence the "black-faced" name, and the tail, feet, and thighs are also black. The back feathers are glossy, and its bill is dark grey with a prominent hook at the tip. It has blue-green eyes. When flying, it holds its head level or lower than its body and holds its wings in a cross-shape like most cormorants.

The breeding and non-breeding plumages are very similar, with the formation of fine white streaks along the neck during breeding until eggs are laid. Juveniles have dark-brown upper feathers, including dark ear coverts and a dark face, with a lighter underside streaked with brown. Following the Juvenile plumage, black-faced cormorants have immature plumage which are similar to adult plumage.

Black-faced cormorants are usually silent when away from the breeding colony. However, when they are at their nests, the male will emit a loud honk or guttural croak, and the female will hiss when approached.

The black-faced cormorant is one of around 40 species in the cormorant and shag family Phalacrocoracidae. This family split off from the darter family Anhingadae over 40 million years ago, so it has a relatively independent evolutionary history. Of the suggested 7 genera in the cormorant family, the black-faced cormorant is part of the Old-Word cormorants Phalacrocorax. This genus diverged from its sister genus, the North-Pacific Cormorants Urile around 10 million years ago.

The closest related species to the black-faced cormorant is the pied cormorant P. varius. 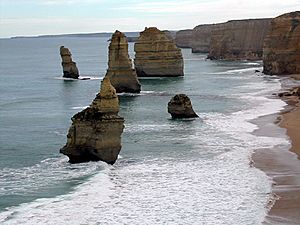 Rocky cliffs on the southern coast of Australia.

Because the black-faced cormorant is an exclusively marine bird, its behaviours enable it to be well-adapted to its environment. It uses pursuit-diving to capture fish, and nests high on cliffs to avoid predators.

The black-faced cormorant eats fish almost exclusively. Its diet generally consists of benthic or demersal fish, as well as some cephalopods, and varies between breeding and non-breeding seasons. It forages along the coast and at the mouths of rivers, and will dive up to 12 m to catch its prey. After diving, the black-faced cormorant will spread its wings to dry its feathers in the sun. Black-faced cormorants will occasionally forage together in flocks. While breeding, its preferred prey items are wrasse and silver trevally. After the breeding season, silverbelly, wrasse, whiting and hardyheads are consumed most frequently. Prey is consumed whole, and non-digestible parts are regurgitated in pellets.

Breeding cormorants nest in pairs or breeding colonies on islands or cliffs. They are likely monogamous like other cormorant species. Nesting sites are on bare rocks, often close to water, and are solidly built of driftwood, seaweed, and other plants with a 35–45 cm diameter. 2 to 3 elongated oval eggs are then laid. The eggs are pale blue-green and measure 58 x 36 mm.

The breeding season for black-faced cormorants varies between populations, and has been observed to occur anywhere from June to February. In the Bass Strait, the black-faced cormorant breeds from June to September, with a peak laying date around the end of July. The reason for this may be to avoid hot summer temperatures that can affect chicks. However, colonies in western and southern Australia breed later in the year, from September to February. 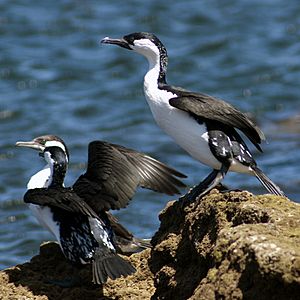 Black-faced cormorants holding wings out to dry their feathers after diving.

All content from Kiddle encyclopedia articles (including the article images and facts) can be freely used under Attribution-ShareAlike license, unless stated otherwise. Cite this article:
Black-faced cormorant Facts for Kids. Kiddle Encyclopedia.