The Onkaparinga River, known as Ngangkiparri or Ngangkiparingga ("place of the women’s river") in the Kaurna language, is a river located in the Southern Adelaide region in the Australian state of South Australia. Rising in the Mount Lofty Ranges, the river's estuary extends from Old Noarlunga to the river's mouth between the suburbs of Port Noarlunga and Port Noarlunga South.

The name derives from the language of the Kaurna people, a word written as either Ngangkiparri or Ngangkiparingga (the -ngga suffix means "at"). Translated, it means "place of the women’s river". 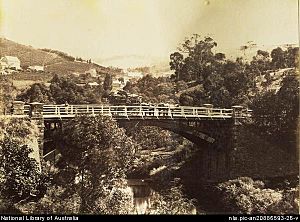 Bridge over the Onkaparinga at Clarendon circa 1869

In 1837 Surveyor-General of South Australia Colonel William Light named it Field's River, or the Field River, after Lieutenant William George Field RN (1804-1850) of the brig Rapid (one of the "first fleet"), who carried out the first surveys in the vicinity of its estuary, but subsequent Governor George Gawler soon reinstated the Indigenous name.

The first Europeans to explore its sources and the Onkaparinga Valley were the party of Dr. George Imlay and John Hill in January 1838.

The Onkaparinga River is the second major river within the Adelaide metropolitan area, after the River Torrens. It is a source of fresh water for Adelaide. Mount Bold Reservoir was constructed between 1932 and 1938 along a section of its path approximately 20 kilometres (12 miles) inland. Much of its flow is diverted via a tunnel from the Clarendon Weir to the Happy Valley Reservoir, that in turn supplies some 40 per cent of Adelaide's water supply. Most years the flow to the reservoir is supplemented by water pumped from the River Murray via a pipeline from Murray Bridge.

All content from Kiddle encyclopedia articles (including the article images and facts) can be freely used under Attribution-ShareAlike license, unless stated otherwise. Cite this article:
Onkaparinga River Facts for Kids. Kiddle Encyclopedia.