Murray Bridge (formerly Mobilong and Edwards Crossing) is a city in the Australian state of South Australia, located 78 kilometres (48 mi) east-southeast of the state's capital city, Adelaide, and 77 kilometres (48 mi) north of the town of Meningie. The city had an urban population of approximately 18,779 as at June 2018, making it the fifth most populous city in the state after Adelaide, Mount Gambier, Gawler and Whyalla.

The city is called Pomberuk by the traditional owners of the land, the Ngarrindjeri people. It was later known as Mobilong and later as Edwards Crossing, before being renamed as Murray Bridge in 1924, deriving its name from the road and railway crossings over the Murray River. The city is situated on the Princes Highway, the main road transport link between Adelaide and Melbourne. 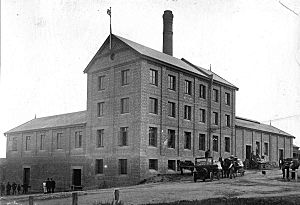 As at the 2016 Census, the Murray Bridge area had a population of 20,858. The median age was 41, and 21.7% of the population were born overseas. The median weekly household income was $973 per week, compared with the South Australian average of $1,206 per week. 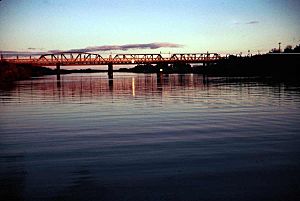 Most of Murray Bridge's retail and dining facilities are located on and in close proximity to Bridge Street. The majority contained within two main shopping centres, Murray Bridge Green and Murray Bridge Marketplace.

Murray Bridge Green opened in 1976 as a Woolworths supermarket and a small number of additional stores. The centre was extended in 2001 and included a Target Country. A new addition to the original shopping complex was completed in 2015, which included a second (and larger) Coles, and a new Target replacing Target Country, which the site made way for a Cheap as Chips discount store. After 42 years of trading, the Woolworths store closed in May 2018.

Murray Bridge Marketplace was opened in November 2011 and contains the city's second Woolworths supermarket (now only Woolworths after the original store closed), a Big W department store, Priceline, Best & Less, Reject Shop, 45 specialty stores, a food court and the public library with undercover parking for over 900 cars. There was a previous Woolworths store that was located in Bridge Street on the corner of Sixth Street opposite the then Town Hall and Court House. This store opened in either late 1969 or 1970 and was later replaced by the 1976 store at the Murray Bridge Green located on Swamport Road and Standen Street.

Discount supermarket Aldi opened further west from the Murray Bridge CBD, on the corner of Adelaide Road and Thomas Street in late 2018.

Target closed in early 2021 and was replaced by K Hub.

The Rail Bridge over the Murray River at sunset, 1975.

Murray Bridge railway station is on the Adelaide to Wolseley railway line, the South Australian part of the Melbourne–Adelaide rail corridor. It is served by Journey Beyond's twice weekly passenger service The Overland operating between Adelaide and Melbourne.

The Overland is the only passenger railway that still services Murray Bridge, after South Australia's country rail operations ceased in the 1990s. Over recent years there have been discussions about re-instating commuter rail services between Adelaide and Murray Bridge, however there has been little to no progress made.

The Murray Bridge Transport Precinct is a historic area that includes the railway station and wharf area, the original bridge constructed in 1879 and converted for dual road and rail use in 1886. It returned to being only a road bridge in 1925 when a separate rail bridge (also included in the heritage precinct) opened to handle heavier trains. The railway now passes under the road approach to the bridge through the Murray Bridge Tunnel, a short cut-and-cover tunnel built as part of works for the new rail bridge in 1925.

Both bridges cross the Murray River between Murray Bridge and Murray Bridge East. The road bridge was part of the Princes Highway from 1935 until 1979. Murray Bridge is now connected by road to Adelaide via the South Eastern Freeway which leads to a newer crossing of the river further south on the Swanport Bridge built in 1979. State road route B35 connects from the north of the town towards Palmer and the central Adelaide Hills and route B36 leads towards Mannum, other river towns and the Sturt Highway.

Various bus and coach services are provided in Murray Bridge, the primary operator being LinkSA, operating a service to Adelaide via Mount Barker and local 'Dial-A-Ride' service. Stateliner (formerly Premier Stateliner) stop at Murray Bridge on its south-east services to Mt Gambier.

Murray Bridge Airport is nine kilometres north of the town, but does not have any scheduled services.

The Lavender Federation Trail is a long-distance walking trail (350 kilometres or 220 miles) that extends from Murray Bridge along the eastern Mount Lofty Ranges to Clare.