The bunyip is a mythical creature from Australian mythology. It is said to live in swamps, billabongs, creeks, riverbeds, and waterholes. The bunyip is found in traditional aboriginal beliefs and stories from many parts of Australia, although it is called by several different names in different language groups. These include kianpraty along the Murrumbidgee, wowee in the Hunter Valley, wee waa in the Narrandera region, as well as many other names. The name bunyip comes from the Wemba-Wemba language of southeastern Australia. It is normally translated today as "devil" or "evil spirit".

During the early settlement of Australia by Europeans, the idea that the bunyip was an actual unknown animal that had yet to be discovered became common. A large number of bunyip "sightings" by settlers were recorded during the 1840s and 1850s, especially in Victoria, New South Wales and South Australia. Various written stories of bunyips were made by Europeans in the early and mid-19th century. Stories were commonly told to children to make them stay away from dangerous areas of water.

There are many different descriptions of what the bunyip looks like. Features that were often reported in newspapers in the early 19th-century included dark fur, a face like a dog, sharp teeth and claws, flippers, tusks or horns, and a duck-like bill. One writer, Robert Brough Smyth, recorded many different descriptions of the bunyip. But he concluded that most people did not really know much about what it looked like or its behaviour, and that they were too afraid of the creature to be able to take note of its appearance.

The first written account of the bunyip was in July 1845. A newspaper reported on the finding of some fossils near Geelong. When the bones were shown to an Aboriginal man, he was said to have immediately recognised it as the bunyip. He was asked to draw a picture of the bunyip. The newspaper described it as having a head like an emu and the body and legs of an alligator. Its legs were said to be strong, with thick and short hind legs and long legs in front. It was said to have long claws. When in the water, it was said to swim like a frog, but when on shore it would walk on its hind legs, standing 12 or 13 feet (3.7 or 4.0 m) high. 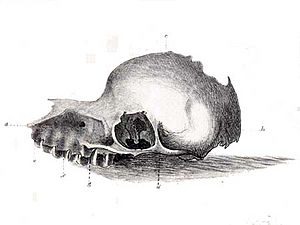 The so-called bunyip skull displayed in the Australian Museum in the 1840s.

In January 1846, a weird-looking skull was taken from the banks of Murrumbidgee River in New South Wales. The person who found it said that all the natives it had been shown to had called it a bunyip. The skull was put on display in the Australian Museum in Sydney. Crowds came to see it, and The Sydney Morning Herald wrote that many of the visitors told stories about their "bunyip sightings".

Another early story about the bunyip was written in 1852 by an escaped convict named William Buckley. He wrote that in many of the lakes he had visited, there lived an "amphibious animal, which the natives call Bunyip". He wrote that he only ever saw the back of the animal, which he said was covered in grey feathers. He described it as being the size of a small cow. He claimed the bunyip was believed to have supernatural powers.

All content from Kiddle encyclopedia articles (including the article images and facts) can be freely used under Attribution-ShareAlike license, unless stated otherwise. Cite this article:
Bunyip Facts for Kids. Kiddle Encyclopedia.