Chander Pahar (Bengali: চাঁদের পাহাড়, English: Mountain of the Moon) is a Bengali adventure novel written by Bibhutibhushan Bandopadhyay and published in 1937. The novel follows the adventures of a young Bengali man in the forests of Africa. The novel is one of the most-loved adventure novels in the Bengali literature and is one of Bibhutibhushan's most popular works. It spawned a media franchise. 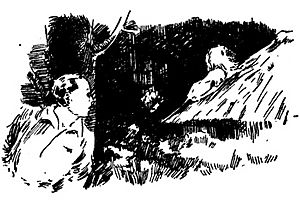 This novel tells the story of an ordinary young Bengali man, Shankar Roy Chowdhury, as he adventures in Africa in the years 1909 and 1910. After graduating from college at 20-years-old, his family's financial struggles almost force him take a job in a jute mill in Shyamnagar — a prospect he absolutely loathes.

Shankar loves the subject of geography, he wants to follow the footsteps of renowned explorers like Livingstone, Mungo Park, and Marco Polo. He wants to explore the wilderness, passionate for learning about African forests and animals. By a stroke of luck, he gets a job as a clerk at the Uganda Railway and rushes to Africa without a second thought.

After a few months laying rail tracks, he encounters the first of many dangers in pre-World War I Africa: a man-eating lion. Later, he takes up a job as station-master in a desolate station amidst the Veldts, where he narrowly escapes a deadly black mamba. While at this post, Shankar encounters, rescues and nurses Diego Alvarez, a middle-age Portuguese explorer and gold/diamond prospector. Alvarez's arrival becomes a turning point in Shankar's life.

While recovering, Alvarez describes his exploits in Africa with his friend Jim Carter. He explains that, lured by the prospect of a priceless yellow diamond from a Kaafi village chief, Alvarez and Carter searched for these yellow diamond caves, on the Mountain of the Moon (Chander Pahar) in the Richtersveld. Rumors suggested a mythical monster, the Bunyip, guards the mine. The explorers set off into the dense jungle, much against the villagers' advice, and Carter was gruesomely killed, supposedly by the Bunyip.

Shankar, inspired by Alvarez's exploits, resigns from his job and accompanies Alvarez to venture again for the mines. They meet hardships, like a racist gambler, legends about Dingonek the monster and later, a raging volcano. Eventually, they get lost in the forests where Alvarez is killed by the Bunyip. Demoralised, Shankar tries to return to civilization. He finds the Bunyip's cave and the diamond mines by accident. Almost getting lost, he finds the remains of the Italian explorer, Attilio Gatti, and learns that the cave is in fact the diamond mine.

Leaving, he becomes lost in the deserts of Kalahari and nearly dies of thirst. Fortunately, he is rescued by a survey team and taken to a hospital in Salisbury, Rhodesia, from where he sets sail for home. Before going back, he writes his account in a newspaper, earning him money. He names the volcano after Alvarez. He ends the book saying that he will return to the cave one day with a large team, and continue the legacy of Alvarez, Carter, and Gatti.

Director Kamaleshwar Mukherjee mentioned Chander Pahar as his "Dream Project". The film has reportedly incorporated CGI and visual effects at par with Hollywood and Bollywood standards. Dev plays the role of the main protagonist, Shankar. Most of the other cast members are from South Africa. According to the crew members, it took a considerable time to decide who would play the role of Diego Alvarez, and South African actor Gérard Rudolf was selected. The first theatrical trailer of the film was released by Shree Venkatesh Films, at the Kolkata Nicco Park on 14 November 2013.

Shooting locations include Kruger National Park, the mountains of Drakensberg, and the deserts of Kalahari.

All content from Kiddle encyclopedia articles (including the article images and facts) can be freely used under Attribution-ShareAlike license, unless stated otherwise. Cite this article:
Chander Pahar Facts for Kids. Kiddle Encyclopedia.