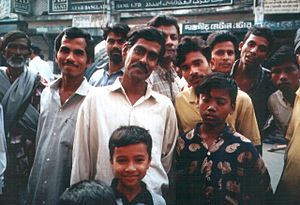 The Bengali people are the main ethnic group in the region of Bengal (now divided between Bangladesh and the Union of India) in South Asia. They speak Bengali (বাংলা Bangla), a language of the eastern branch of the Indo-Aryan languages.

They are natively concentrated in the nation of Bangladesh and in the Indian states of West Bengal and Tripura. Some of the most well established Bengali communities are in the Middle East, Japan, Malaysia, United Kingdom and United States.

Remnants of civilisation in the greater Bengal region date back 4,000 years, when the region was settled by Dravidian, Tibeto-Burman and Austroasiatic peoples. The origin of the word Bangla ~ Bengal is unknown, but it is believed to be derived from the Dravidian-speaking tribe Bang that settled in the area around the year 1000 BC.

After the arrival of Indo-Aryans, the kingdoms around Bengal were first described in the Atharvaveda about 1000 BC. From the 6th century BC, Magadha expanded to include most of the Bihar and Bengal regions. It was one of the four main kingdoms of India at the time of Buddha. Magadha extended over nearly all of South Asia, including parts of Persia and Afghanistan, reaching its greatest extent under the Buddhist emperor Ashoka the Great in the 3rd century BC. One of the earliest foreign references to Bengal is the mention of a land ruled by the king Xandrammes named Gangaridai by the Greeks around 100 BC. The word is speculated to have come from Gangahrd (Land with the Ganges in its heart) in reference to an area in Bengal. Later from the 3rd to the 6th centuries AD, the kingdom of Magadha served as the seat of the Gupta Empire.

All content from Kiddle encyclopedia articles (including the article images and facts) can be freely used under Attribution-ShareAlike license, unless stated otherwise. Cite this article:
Bengali people Facts for Kids. Kiddle Encyclopedia.