Battle of Plassey facts for kids 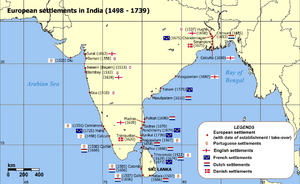 The Battle of Plassey was a major battle that took place on 23 June 1757 at Palashi, Bengal. It was an important British East India Company victory over the Nawab of Bengal and his French allies. It was part of the Third Carnatic War, and of the worldwide Seven Years' War in which France and its allies fought Britain and its allies. British victory let the British East India Company take control of the eastern part of the Indian subcontinent. In the next hundred years their area of control grew over the rest of India.

The battle took place at Plassey, Bengal on the river banks of the Bhagirathi-Hooghly River, a distributary of the Ganges. The fighting took place about 150 kilometres (93 mi) north of Calcutta. This was near Murshidabad which was the capital of Bengal at the time. Plassey is the anglicised version of Palashi. The battle was between Siraj ud-Daulah, the last independent Nawab of Bengal, and the British East India Company.

The battle took place after the attack and plunder of Calcutta by Siraj-ud-daulah and the Black Hole of Calcutta tragedy.

The troubles between Siraj-ud-daulah and the British led to the Battle of Plassey. First, the British had strengthened the fortification around the Fort William without telling the Nawab. Secondly, they abused the trade privileges granted to them by the Mughal rulers, which caused heavy loss of customs duties for the government. Third, they gave shelter to some of his officers, for example Krishnadas, son of Rajballav, who fled Dhaka after misappropriating government funds. Hence, when the East India Company started further enhancement of military preparedness at Fort William in Calcutta, Siraj asked them to stop. The Company did not stop, so Siraj-ud Daulah retaliated and captured Kolkata (Shortly renamed as Alinagar) from the British in June 1756. The Nawab gathered his forces together and took Fort William.

The British sent more soldiers under Colonel Robert Clive and Admiral Charles Watson from Madras to Bengal. The British retook control of Calcutta. Clive then took control of the French fort of Chandernagar. The battle was fought during the Seven Years' War (1756–63). The French East India Company sent a small group to fight against the British. Siraj-ud-Daulah had more soldiers and chose to fight at Plassey. The British were worried about having fewer soldiers. They formed a conspiracy with Siraj-ud-Daulah's demoted army leader Mir Jafar as well as others such as Yar Lutuf Khan and Rai Durlabh. Mir Jafar, Rai Durlabh and Yar Lutuf Khan brought their soldiers near Plassey but did not actually join the battle. Siraj-ud-Daulah's army was beaten by about 3,000 soldiers of Col. Robert Clive, and Siraj-ud-daulah fled from the battlefield.

This is thought to be one of the most important battles for the control of the Indian subcontinent by the colonial powers. The British now had influence over the Nawab. They also got a lot of revenue from trade. The British used this revenue to increase their military power. They pushed the other European colonial powers such as the Dutch and the French out of South Asia. This was a sign of the expansion the British Empire in Asia.

As a reward for his treachery, Mir Jafar was made the Nawab of Bengal. Former Nawab Mutsheed Kiki Khan directed all landowners of Bangla, Bihar and odisa a not to sell any plot of lands to British East India Company.

All content from Kiddle encyclopedia articles (including the article images and facts) can be freely used under Attribution-ShareAlike license, unless stated otherwise. Cite this article:
Battle of Plassey Facts for Kids. Kiddle Encyclopedia.