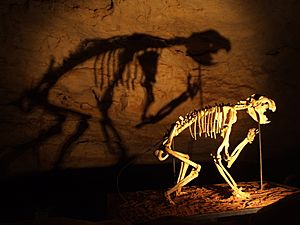 Australian megafauna is a word used to describe a number of animal species in Australia that are quite a bit bigger than their closest living relatives. These species became extinct during the Pleistocene (16,100±100 - 50,000 years before present), but exact dates for their extinction have only been discovered recently.

Some mythological creatures from the Aboriginal dreamtime look a bit like animals from the prehistoric Australian megafauna.

Scientists have got new evidence, based on new and better ways of finding dates, using optically stimulated luminescence and Uranium-thorium dating of megafaunal bones. This suggests that humans were the main cause of the extinction of megafauna in Australia. The dates show that the last of the megafauna became extinct around the same time, about 47,000 years ago. This was the time in which humans first arrived in Australia. The dates suggest the main reason for extinction was human burning of the land. Many plants were not able to survive regular fires, and so the types of plants changed. Scientists have studied oxygen and carbon isotopes from teeth of megafauna. These show sudden, dramatic, non-climate-related changes in plants, and in the diet of surviving marsupial animals, as well as the loss of megafaunal species. Further study of the teeth of megafauna shows the climate was dry at the time of extinction, similar to the dry climate of today, and that the megafauna were able to live in dry climates.

The following is a list of some of the Australian megafauna. It shows:

Mammals are set out by size with largest at the top.

The diprotodon was a hippopotamus-sized marsupial, most closely related to the wombat. 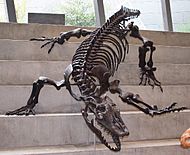 All content from Kiddle encyclopedia articles (including the article images and facts) can be freely used under Attribution-ShareAlike license, unless stated otherwise. Cite this article:
Australian megafauna Facts for Kids. Kiddle Encyclopedia.