Zygomaturus is an extinct genus of giant marsupial from Australia during the Pleistocene. 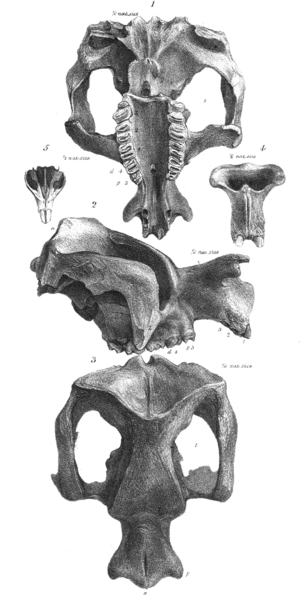 Skull of Zygomaturus in various views, from Owen 1859 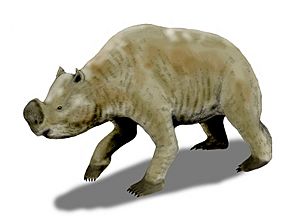 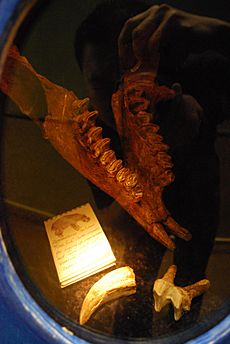 It had a heavy body and thick legs and is believed to be similar to the modern pygmy hippopotamus in both size and build. The genus moved on all fours. Zygomaturus lived in the wet coastal margins of Australia and also is believed to have expanded its range toward the interior of the continent along the waterways. It is believed to have lived solitarily or possibly in small herds. Zygomaturus probably ate reeds and sedges by shovelling them up in clumps with its lower incisor teeth. However, in analysis of remains from Cuddie Springs, the carbon isotope ratios suggests that it consumed both C3 and C4 plants, with a dental microwear texture indicative of browsing,

It was once thought that Zygomaturus became extinct about 45,000 years ago until a surprisingly late date of 33-37 Kya is known from the Willandra Lakes Region in New South Wales, the latest known date for any Australian Megafauna. This is well after aboriginal arrival in Australia around 50 Kya.

All content from Kiddle encyclopedia articles (including the article images and facts) can be freely used under Attribution-ShareAlike license, unless stated otherwise. Cite this article:
Zygomaturus Facts for Kids. Kiddle Encyclopedia.