The Willandra Lakes Region is a World Heritage Site that covers 2,400 square kilometres in south-western New South Wales, Australia. It includes important natural and cultural features. The lakes were formed about two million years ago, but are now dry. The Australian Aborigines camped around the lakes, especially in the sand dunes on the lake shores for at least 50,000 years. These dunes are crescent shaped, and are called lunettes. The world's oldest cremation, of an woman more than 40,000 years ago, was found in a lunette at Lake Mungo. A small section of the region is protected by the Mungo National Park. As well as Lake Mungo, there is also Lake Mulurulu which was the last lake to hold water, the Prungle lakes which have been dry for more than 20,000 years, and Lake Chibnalwood which has a 30 metre high lunette, one of the biggest in the world.

The Willandra Lakes Region was added to the Australian National Heritage List in May 2007. 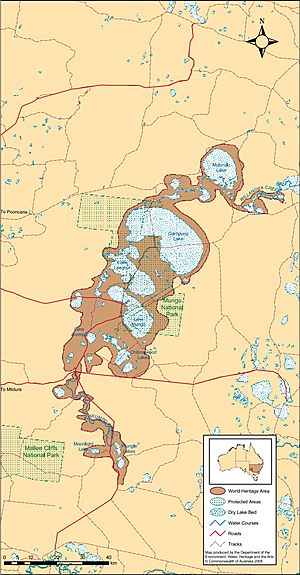 All content from Kiddle encyclopedia articles (including the article images and facts) can be freely used under Attribution-ShareAlike license, unless stated otherwise. Cite this article:
Willandra Lakes Region Facts for Kids. Kiddle Encyclopedia.