The common wombat (Vombatus ursinus), also known as the coarse-haired wombat or bare-nosed wombat, is a marsupial, one of three extant species of wombats and the only one in the genus Vombatus. The common wombat grows to an average of 98 cm (39 in) long and a weight of 26 kg (57 lb). 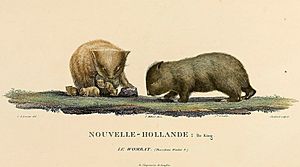 1807 illustration of the now-extinct wombats of King Island

The common wombat was first described by George Shaw in 1800. Three subspecies are noted, though their distinctness is somewhat uncertain:

Hackett's wombat (Vombatus hacketti) was the other species in the genus, inhabiting the southwest of Australia. Being around the same size as V. ursinus, with an average weight of 30 kg, V. hacketti went extinct at the end of the Late Pleistocene, in the Quaternary extinction event. 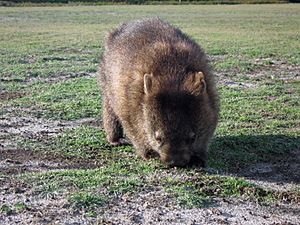 Common wombats are widespread in the cooler and better-watered parts of southern and eastern Australia, including Tasmania, and in mountain districts as far north as the south of Queensland, but is declining in western Victoria and South Australia.

Common wombats can be found at any elevation in the south of their range, but in the north of their range are only found in higher, more mountainous areas. They may be found in a variety of habitats including rainforest, eucalyptus forest, woodland, alpine grassland, and coastal areas. In some regions, they have adapted to farmland and can even be seen grazing in open fields with cattle and sheep.

Common wombats are sturdy and built close to the ground. When fully grown, they can reach between 80 and 130 cm, and weigh between 17 and 40 kg. The wombats found on Tasmania and Flinders Island are often smaller than their mainland counterparts. It is distinguished from both hairy-nosed wombats by its bald nose.

Common wombats are a solitary, territorial species, with each wombat having an established range in which it lives and feeds. In this area, they dig a tunnel system, with tunnels ranging from 2 to 20 m in length, along with many sidetunnels. Usually, only one entrance to the burrow exists, although they may create a smaller one with which to escape. Often nocturnal, the common wombat does come out during the day in cooler weather, such as in early morning or late afternoon.

Common wombats are herbivorous, subsisting on grass, snow tussocks, and other plant materials. Foraging is usually done during the night.

The common wombat can breed every two years and produce a single joey. The gestation period is about 20–30 days, and the young remain in the pouch for five months. When leaving the pouch, they weigh between 3.5 and 6.5 kg (7.7 and 14.3 lb). The joey is weaned around 12 to 15 months of age, and is usually independent at 18 months of age. Wombats have an average lifespan of 15 years in the wild and 20 years in captivity.

All content from Kiddle encyclopedia articles (including the article images and facts) can be freely used under Attribution-ShareAlike license, unless stated otherwise. Cite this article:
Common wombat Facts for Kids. Kiddle Encyclopedia.