Naracoorte (population 4,888) is a town in the Limestone Coast region of South Australia, approximately 336 kilometres south-east of Adelaide and 100 kilometres north of Mount Gambier on the Riddoch Highway (A66).

Naracoorte was formed from the merger of two towns, Kincraig, founded in 1845 by Scottish explorer William Macintosh, and Narracoorte, established as a government settlement in 1847. The name has gone through a number of spellings, and is believed to be derived from the Aboriginal words for place of running water or large waterhole. It grew during the 1850s as a service town for people going to and from the Victorian gold rush. The Post Office opened on 22 March 1853 and was known as Mosquito Plains until 1861. The Railway Line to Kingston closed on 28 November 1987 then dismantled 15 September 1991 then the Mount Gambier to Wolseley line closed 12 April 1995 whilst still pending for gauge standardization.

The town has historically relied largely on sheep, cattle and wheat farming. In recent decades, tourism has become a major industry with the promotion of the World Heritage-listed Naracoorte Caves National Park and the internationally recognised wetland, Bool Lagoon. It also receives a substantial number of visitors due to its proximity to the Coonawarra, Wrattonbully, and Padthaway wine regions.

Naracoorte is in the Naracoorte Lucindale Council, the state electoral district of MacKillop and the federal Division of Barker. The postcode is 5271.

The town has an Australian Rules football team competing in the Kowree-Naracoorte-Tatiara Football League. and also supplies players for a number of surrounding teams such as Kybybolite, Padthaway and Border Districts. 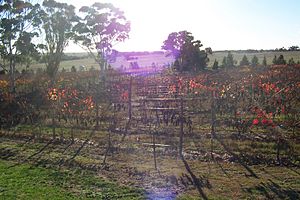 Naracoorte has a number of heritage-listed sites, including:

All content from Kiddle encyclopedia articles (including the article images and facts) can be freely used under Attribution-ShareAlike license, unless stated otherwise. Cite this article:
Naracoorte, South Australia Facts for Kids. Kiddle Encyclopedia.