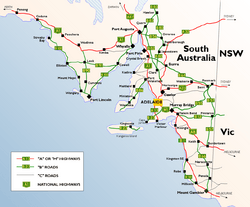 The Coonawarra wine region is a wine region centred on the town of Coonawarra in the Limestone Coast zone of South Australia. It is known for the Cabernet Sauvignon wines produced on its "terra rossa" soil. Coonawarra is an Aboriginal word meaning "Honeysuckle". It is about 380 km southeast of Adelaide, close to the border with Victoria. 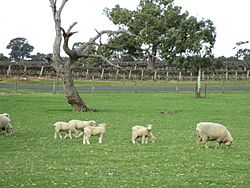 The first vines were planted by John Riddoch at Yallum, South Australia in 1890. Only the Redman family of Rouge Homme continued to produce table wine during this period, during which Shiraz was the main grape variety grown.

Fortunes changed when Samuel Wynn recognised the potential of the strip of terra rossa soil, and bought the original Riddoch cellars in 1951. Led by Wynns and Penfolds, Coonawarra was to play a leading role in the transformation of the Australian wine industry as it changed from making fortified wines to conventional table wines.

Coonawarra's terra rossa soil is one of the notable terroirs of the New World, covering an area of just 15 km x 2 km north of Penola. It lies on a shallow limestone ridge, raising it above the swampy land either side – it is no coincidence that the Riddoch Highway follows this ridge as carters sought the firmest ground in times past. This special bright red soil is clearly visible on an aerial photo.

To the west of the ridge lies black rendzina soil which is poorly drained, and so is much less favourable for vines. There is also a 'transitional', or brown rendzina, soil which grows vines quite successfully. This geological complexity led to many disputes during an eight-year period before Coonawarra was entered on the Register of Protected Names. At least one vineyard (belonging to Penola High School) has the boundary pass through the middle.

Being just 60 km from the sea, Coonawarra has a somewhat maritime climate not dissimilar to Bordeaux. During the growing season, there is just 219mm rainfall (Oct-Apr), out of 585mm annually. Extensive cloud cover keeps the temperature down to 19.1 °C in January. 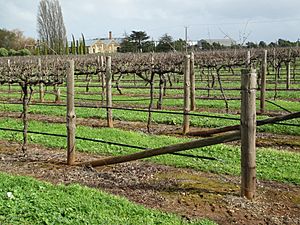 Winter vines with Wynns' in the background

Coonawarra is synonymous with Cabernet Sauvignon, full of plum and blackcurrant fruit, so much so that successes with other grape varieties is overlooked. In the early days Shiraz was the most widely planted grape, and it produces some star wines such as Wynns Coonawarra Estate Michael Shiraz (formerly Michael Hermitage). The limestone geology also suits Chardonnay, Riesling, and Sauvignon blanc.

All content from Kiddle encyclopedia articles (including the article images and facts) can be freely used under Attribution-ShareAlike license, unless stated otherwise. Cite this article:
Coonawarra wine region Facts for Kids. Kiddle Encyclopedia.