Bool Lagoon Game Reserve is a protected area located in the Limestone Coast region of South Australia, about 24 kilometres (15 miles) south of the town of Naracoorte.

In 1980, it was listed on the now-defunct Register of the National Estate.

In 1985, the area covered by both the game reserve and the Hacks Lagoon Conservation Park was added under the name "Bool and Hacks Lagoons" to the List of Wetlands of International Importance maintained by the Ramsar Convention. 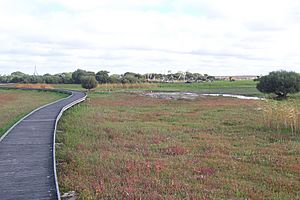 While Bool Lagoon is officially a game reserve, in dry years it attracts many waterbirds of many species, and is frequently a point of contention between duck hunters and animal rights activists. The adjacent Hacks Lagoon Conservation Park also provides refuge for waterbirds. There are a number of boardwalks and bird hides at both lagoons to facilitate birdwatching. The lagoons are visited by up to 150 species of birds, many having migrated from the Northern Hemisphere. The reserve is classified as an IUCN class VI protected area.

Another ecological issue is that in the past, hunters used much lead shot. In recent times, even when the lagoon is opened for hunting, only steel shot may be used.

All content from Kiddle encyclopedia articles (including the article images and facts) can be freely used under Attribution-ShareAlike license, unless stated otherwise. Cite this article:
Bool Lagoon Game Reserve Facts for Kids. Kiddle Encyclopedia.