Lake Albert is a notionally fresh water lake near the mouth of the Murray River in South Australia. It is filled by water flowing in from the larger Lake Alexandrina at its mouth near Narrung. It is separated on the south by the Narrung Peninsula from the salt-water Coorong. The only major town on the lake is Meningie. Lakes Alexandrina and Albert are together known as the Lower Lakes.

Naming of lake and associated features

The lake was named after Prince Albert, the Consort of Queen Victoria, by the Governor, George Gawler. 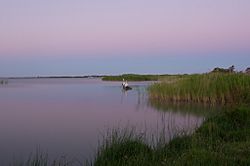 Lake Albert is part of the wetland complex known as the Coorong and Lakes Alexandrina and Albert Wetland which is listed as a Ramsar site. The wetland is also appears in the non-statutory list known as A Directory of Important Wetlands in Australia.

Lake Albert is included within the boundary of the Lakes Alexandrina and Albert Important Bird Area which is an area considered by BirdLife International to be a place of ‘international significance for the conservation of birds and other biodiversity.’

All content from Kiddle encyclopedia articles (including the article images and facts) can be freely used under Attribution-ShareAlike license, unless stated otherwise. Cite this article:
Lake Albert (South Australia) Facts for Kids. Kiddle Encyclopedia.