Wingard was born in Murray Bridge, South Australia. He went to Unity College Murray bridge. His father Trevor is part of the Indigenous Australian Kaurna people and his mother Julie is Irish. Julie works at an emergency accommodation centre. Chad has an older brother and a younger brother, as well as five younger foster siblings. At 16 and 60 kg, Wingard was a member of Murray Bridge's 2009 Imperial Football Club league team that won the River Murray Football League premiership. In that game, he kicked five goals.

"He came on 19 minutes into first quarter – kicking five goals, including three of most freakish you’d wish to see”

Wingard also played basketball as a kid, and was the captain of South Australia's under-16 basketball team. 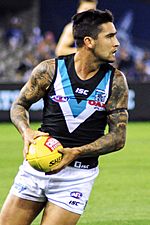 Wingard made his debut for Port Adelaide in round 19, 2012 against St Kilda. His breakout game came during Port Adelaide's round 22, 2012 loss to the Brisbane Lions where he received an AFL Rising Star nomination for his 27 disposal, 1 goal and 5 mark performance.

For season 2013, which was only his second season, he averaged 21.3 disposals a game and kicked 43 goals. He was named in the 2013 All-Australian team, making him the youngest player to make an All-Australian team since Mark Ricciuto in 1994. Wingard's 2013 season also saw him win the Showdown Medal for his five-goal performance in round 19 against the Adelaide Crows where he was described after the match as "Port's most exciting player since Gavin Wanganeen." At season's end, he was rewarded with the John Cahill Medal, making him the youngest player to win a best and fairest at Port Adelaide since Craig Bradley in 1982.

Wingard's 2014 season saw his averages drop from 21 disposals per game to 16 per game, however he still managed to kick 43 goals in total. He won the Mark of the Year in round 12 against St Kilda by jumping high on the shoulders of Sean Dempster.

Season 2015 is considered Wingard's greatest season to date. He booted a career high 53 goals to be the club's leading goal kicker of the season by kicking multiple goals in every game from rounds 8 to 22 as well as kicking at least one goal in every game until round 23. Wingard also averaged 19.2 disposals a game and was recognised with the All-Australian selection, a stunning achievement for a player having completed just his fourth year at AFL level.

At the conclusion of the 2018 season, Wingard sought a trade from Port Adelaide. He eventually requested a trade to Hawthorn, and was traded on 17 October.

Hawthorn traded their first round pick and promising youngster Ryan Burton for Wingard. During the preseason Wingard developed a calf complaint that forced him to miss all the warm up games and the first two games of the 2019 season. He made his debut for his new club against North Melbourne and kicked three goals to help win the match.

All content from Kiddle encyclopedia articles (including the article images and facts) can be freely used under Attribution-ShareAlike license, unless stated otherwise. Cite this article:
Chad Wingard Facts for Kids. Kiddle Encyclopedia.