The South Eastern Freeway (previously signposted as Princes Highway) is a 76 kilometre controlled-access highway in South Australia. It carries traffic over the Adelaide Hills between Adelaide and the River Murray, near Murray Bridge, connecting via the Swanport Bridge to the Dukes Highway which is the main road route to Victoria. It is often referred to by South Australians simply as the Freeway, as it was the first freeway in South Australia, and is still the longest, and the only one with "Freeway" in its name rather than "Expressway" or "Highway". It is a part of the National Highway network linking the state capital cities Adelaide to Melbourne and signed as National Highway M1. The South Eastern Freeway includes 500-metre-long twin-tube tunnels (the Heysen Tunnels) in the descent towards Adelaide, the first of their kind on the National Highway. It is designated as the M1.

The South Eastern Freeway features 6 lanes of traffic, arrester beds and concrete median barriers, with street lighting between Glen Osmond and Crafers. The remainder of the length to the Swanport Bridge is dual carriageways with two lanes in each direction.

Prior to the initial construction of the freeway in the 1960s, all inbound and outbound road traffic between Adelaide and south-eastern South Australia and Victoria had to travel on a two-lane highway originally built in the early part of the 20th century. With growth in Adelaide's population issues of congestion and safety mandated reconstruction. Studies began in 1962 for a freeway commencing from Crafers, that endpoint selected arguably due to the massive expenditure required with the precedent upgrade of the Mount Barker Road.

Road construction began in 1965 from Crafers and the first stage of eastbound traffic lanes were opened in 1967, the first westbound section in 1969. The freeway was opened in stages as construction progressed. The final section bypassing the town of Murray Bridge and connecting to the new Swanport Bridge over the River Murray opened in 1979, replacing the historic bridge in the town for through traffic.

The opening of the freeway resulted in the less direct Bridgewater railway line losing patronage, and the line eventually closed to passengers in 1987.

The Adelaide–Crafers Highway extension came as a much-needed upgrade and replacement to the previous link road, the Mount Barker Road, which had been contoured to the Adelaide Hills, giving rise to many steep turns, ascending a tortuous route. The tightest hairpin turn on the Mount Barker Road became infamous as 'the Devils Elbow', often the site of car and semi-trailer accidents.

On 16 May 1995, Prime Minister Paul Keating announced the construction of the new Adelaide-Crafers section. The Heysen Tunnels, named after well-known South Australian artist and benefactor Hans Heysen, were completed in 1998. Construction was completed early 2000 and on 5 May 2000 Prime Minister John Howard opened the new road. It was the largest South Australian road project at that time, costing a total of A$151 million, wholly funded by the Australian Federal Government. 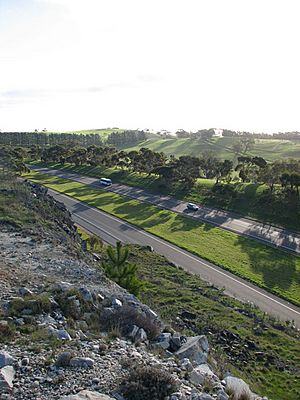 An additional exit was built at Monarto around 1999 to service an expanding commercial zone and Monarto Zoo in the area. Another exit was announced in 2014 at Bald Hills Road 4 km southeast of the Mount Barker interchange to service growing housing estates in southern Mount Barker and Nairne. The contract was announced on 1 April 2015 that Bardavcol would commence construction in May 2015, with the interchange including entry and exit ramps in both directions opening in mid-2016. The $27M project was funded $16M by the Australian government, $8M from South Australia and $3M from Mount Barker district council. The new interchange opened on 15 August 2016.

The Freeway bypasses many towns previously along the Princes Highway including

The Adelaide end of the South Eastern Freeway leads downhill to traffic lights at the intersection of Glen Osmond Road which continues northwest as route number A1 into the Adelaide city centre, Portrush Road which carries the National Highway designation (as A17) north to bypass the city and towards Port Adelaide, and Cross Road which leads west towards the southern suburbs of Adelaide.

The southeastern end of the freeway, near Murray Bridge feeds onto the Swanport Bridge, a two-lane one kilometre long bridge over the River Murray, where it joins the Princes Highway, a dual-carriageway highway to Tailem Bend. At this point, Highway 1 becomes a two-laned, two-way scenic route which passes through many coastal towns of South Australia and Victoria. The National Highway continues to Melbourne as the Dukes Highway (A8) from Tailem Bend to the Victorian border and beyond as the Western Highway.

All content from Kiddle encyclopedia articles (including the article images and facts) can be freely used under Attribution-ShareAlike license, unless stated otherwise. Cite this article:
South Eastern Freeway Facts for Kids. Kiddle Encyclopedia.