Kids Encyclopedia Facts
Not to be confused with Callington, Cornwall.

Callington is a small town on the eastern slopes of the Adelaide Hills, in South Australia. Callington is situated on the Bremer River, and is adjacent to the South Eastern Freeway and the Adelaide-Wolseley railway line, however no trains have stopped at the station for many years. Callington is located within the state electoral district of Kavel and the federal division of Mayo.

Callington was surveyed in 1848, at which time John Kiernan noticed copper in the rocks. Callington was named after the copper mining town Callington in Cornwall, UK. The Callington Inn opened in 1851. Little copper was mined at first, before the miners followed the Victorian gold rush. Mining restarted a few years later in the Bremer Mine, digging the lode down until the water table was reached. In 1857 a forty-inch steam engine was installed to pump out 500,000 litres (110,000 imp gal; 130,000 US gal) of water per day. An even bigger pump was brought from Hallett Cove in 1959. In 1860-61, 150 workers were mining 250-300 tons of ore a month, which was smelted at Callington. Despite some good years, the Bremer Mine eventually fell into liquidation in 1870 due to low copper prices. 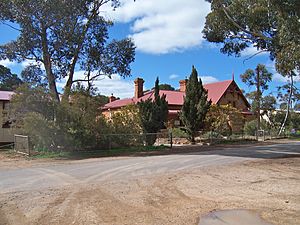 Callington has a kindergarten and a primary school in the town. Students need to travel to Mount Barker, Strathalbyn or Murray Bridge for high school.

All content from Kiddle encyclopedia articles (including the article images and facts) can be freely used under Attribution-ShareAlike license, unless stated otherwise. Cite this article:
Callington, South Australia Facts for Kids. Kiddle Encyclopedia.