Kids Encyclopedia Facts
Not to be confused with Callington, South Australia.

The town is situated in east Cornwall between Dartmoor to the east and Bodmin Moor to the west. A former agricultural market town, it lies at the intersection of the south-north A388 Saltash to Launceston road and the east-west A390 Tavistock to Liskeard road.

Kit Hill is a mile northeast of the town and rises to 333 metres (1,093 ft) with views of Dartmoor, Bodmin Moor and the River Tamar.

The hamlets of Bowling Green, Kelly Bray, Frogwell and Downgate are in the parish.

Callington railway station was the terminus of a branch line from Bere Alston, the junction with the Southern Railway's Tavistock to Plymouth line. The railway line beyond Gunnislake to the Callington terminus was closed in the 1960s, due to low usage and difficult operating conditions on the final sections of the line due to several severe gradients and speed restrictions. One can still travel by rail on the Tamar Valley Line from Plymouth as far as Gunnislake via Bere Alston, where trains reverse. For most of its journey the line follows the River Tamar. The nearest railway station to Callington is at Saltash. 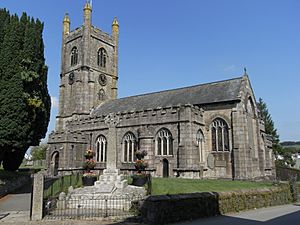 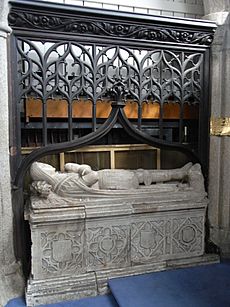 Callington has been postulated as one of the possible locations of the ancient site of Celliwig, associated with King Arthur. Nearby ancient monuments include Castlewitch Henge with a diameter of 96m and Cadsonbury Iron Age hillfort, as well as Dupath Well built in 1510 on the site of an ancient sacred spring.

Callington was recorded in the Domesday Book (1086); the manor had 4 hides of land and land for 30 ploughs. The lord had land for 3 ploughs with 11 serfs. 24 villeins and 14 smallholders had land for 15 ploughs. There were also one and a half square leagues of pasture and a small amount of woodland. The income of the manor was £6 sterling.

In the 19th century, Callington was one of the most important mining areas in Great Britain. Deposits of silver were found nearby in Silver Valley. Today, the area is marked by mining remains, but there are no active mines. However, granite is still quarried on Hingston Down.

The former Callington constituency, a rotten borough, elected two members to the unreformed House of Commons but was abolished by the Reform Act 1832. The town is now in the South East Cornwall constituency.

St Mary's Church was originally a chapel of ease to South Hill; it was consecrated in 1438 and then had two aisles and a buttressed tower; a second north aisle was added in 1882. Unusually for Cornwall there is a clerestory; the wagon roofs are old. The parish church contains the fine brass of Nicholas Assheton and his wife, 1466.

In recent years, the town has seen much residential development with more, including social housing, planned for the next few years.

Callington is twinned with Guipavas in Brittany, France, and Barsbüttel near Hamburg in Germany. It also has unofficial friendship links with Keila in Estonia and a suburb of Malaga, Spain.

All content from Kiddle encyclopedia articles (including the article images and facts) can be freely used under Attribution-ShareAlike license, unless stated otherwise. Cite this article:
Callington, Cornwall Facts for Kids. Kiddle Encyclopedia.