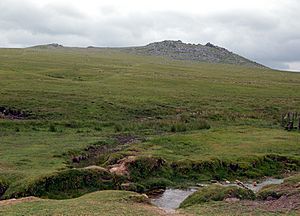 Bodmin Moor is a granite moorland in northeastern Cornwall, United Kingdom. It is 208 square kilometres (80 sq mi) in size, and originally dates from the Carboniferous period of geological history.

Bodmin Moor is one of five granite plutons (underground masses of igneous rock) in Cornwall.

The name 'Bodmin Moor' is fairly recent, invented in 1813. It was formerly known as Fowey Moor after the River Fowey which rises within it. Since the mid 18th century Bodmin Moor has been crossed by the trunk road now known as the A30.

Dramatic granite tors rise from the rolling moorland: the best known are Brown Willy, the highest point in Cornwall at 417 m (1,368 ft), and Rough Tor at 400 m (1,300 ft). Considerable areas of the moor are poorly drained and form marshes (in hot summers these can dry out). The rest of the moor is mostly rough pasture or overgrown with heather and other low vegetation.

The Moor contains about 500 farm holdings with around 10,000 beef cows, 55,000 breeding ewes and 1,000 horses and ponies. Most of the moor is a Site of Special Scientific Interest (SSSI) and has been officially designated an Area of Outstanding Natural Beauty (AONB), as part of Cornwall AONB.

Bodmin Moor is the source of several of Cornwall's rivers: they are mentioned here anti-clockwise from the south.

Inland waters on the moor include Dozmary Pool (Cornwall's only natural inland lake) and three reservoirs, Colliford Lake, Siblyback Lake and Crowdy reservoir which supply water for a large part of the county's population.

All content from Kiddle encyclopedia articles (including the article images and facts) can be freely used under Attribution-ShareAlike license, unless stated otherwise. Cite this article:
Bodmin Moor Facts for Kids. Kiddle Encyclopedia.