King Arthur's Hall is a megalithic enclosure on Bodmin Moor in Cornwall, England. It is thought to be a late Neolithic or early Bronze Age ceremonial site. 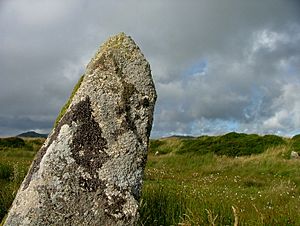 The monument consists of fifty-six stones arranged in a rectangle with a bank of earth around them and measures approximately 20m by 47m. The interior fills with water and a contemporary ground level has not been established. It has suffered damage by cattle in the past and is now protected by a gated fence. It can be reached by footpaths east of St Breward.

In the absence of any archaeological finds, its origin and use is only speculative. A similar enclosure exists in Brittany which was a Bronze Age cremation site, but a similar rampart construction at Lough Gur in Ireland suggests an earlier Neolithic date. It has even been suggested that it was merely a medieval cattle pound, but the effort required to build the bank and to erect the slabs suggests that it had a more important function.

Some clearance and investigation of King Arthur's Hall was conducted by members of The Heritage Trust in 2013/14. Their work revealed a revetment wall built to retain the inner bank. It was concluded that over time the earth had covered over the top of the revetment wall and that around 140 upright stones now lie buried, recumbent, or standing at an angle. It was suggested that the structure originally formed a tank which filled with water, possibly for ritualistic use.

All content from Kiddle encyclopedia articles (including the article images and facts) can be freely used under Attribution-ShareAlike license, unless stated otherwise. Cite this article:
King Arthur's Hall Facts for Kids. Kiddle Encyclopedia.