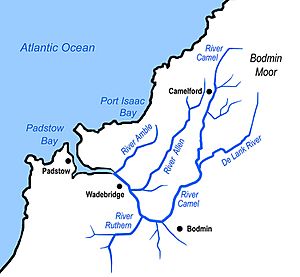 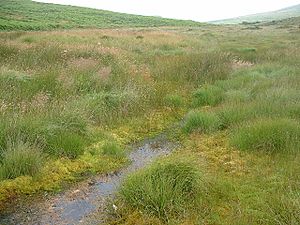 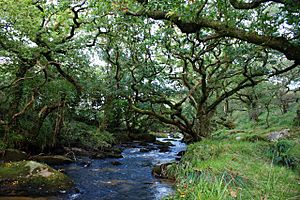 The De Lank River near Hantergantick

The De Lank River (Cornish: Dowr Dinlonk, meaning ravine fort river) is a small river in north Cornwall, England. It is a tributary of the River Camel and is approximately nine miles (14.5 km) long from its source on Bodmin Moor to its confluence with the Camel two miles (3 km) south of St Breward.

The De Lank River springs from Rough Tor Marsh between the two highest peaks on Bodmin Moor, Rough Tor and Brown Willy. Initially, its course is south between the peaks before turning southwest, past the southern foot of Garrow Tor, heading for the Camel. The De Lank's course is within the civil parish of St Breward.

All content from Kiddle encyclopedia articles (including the article images and facts) can be freely used under Attribution-ShareAlike license, unless stated otherwise. Cite this article:
De Lank River Facts for Kids. Kiddle Encyclopedia.