Kids Encyclopedia Facts
Note: Stirling North is a different town 300 km away, in the Mid North of the same state.

Stirling is a town in the Adelaide Hills, South Australia, approximately 15 km from the Adelaide city centre. It is administered by the Adelaide Hills Council. Its population is about 2500. Neighbouring townships are Crafers and Aldgate. Other nearby towns are Heathfield and Bridgewater. Of those five, Stirling has by far the largest commercial strip, with the greatest number and widest variety of shops, the only police station, and the only banks. Stirling East, a similar sized area towards Aldgate, is home to several schools.

Founded in 1888, Stirling grew rapidly as a result of the expansion of apple growing and market gardening to satisfy the demand of the expanding city of Adelaide, whose centre is only 15 kilometres from Stirling. It also developed as a residential address for Englishmen who could afford it, to escape Adelaide's hot summers. As a result, many historic, grand mansions can be found in the area. Today, farming has declined as more of the region has been urbanised, with many Stirling residents commuting to Adelaide daily.

Many deciduous trees, particularly the maple, have been imported from Europe and North America. These trees flourish in Stirling's wet and mild to cool climate and are a popular tourist attraction in the autumn months (April–May), bringing rich and vibrant autumn leaf colour to the town. This activity is known as "leaf peeping". Some Australian cities are too warm (even in the autumn and winter months) to accommodate and produce maple trees, but some temperate regions along the eastern coast and towns at higher altitudes flourish in colour during autumn, rivalling those in North America, Europe and Japan.

Other tourist sites include the nearby Belair National Park and Cleland Conservation Park. 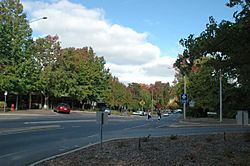 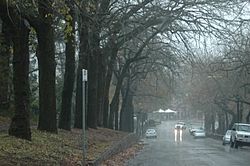 Owing to its location near Mount Lofty, Stirling is the wettest place in South Australia, receiving an average of 1200 millimetres (47 inches) of rain per year - more than twice the average of Adelaide. Between May and August, the average monthly rainfall is as high as 155 millimetres (over 6 inches), and in June 1916, over 450 millimetres fell. Mean summer temperatures are about 5 °C (9 °F) lower than in Adelaide, which may explain why Stirling was recommended as a desirable residence for English migrants and Adelaide's high society in the 20th century. Winters are distinctly cool particularly compared to Adelaide, with an average minimum of 4 °C (39 °F) and an average maximum of 11 °C (52 °F).

The Australian Bureau of Meteorology stopped the collection of weather data at Stirling from the 1980s onward. Weather recording instruments were removed from the grounds of Australia Post's Stirling office following a commercial dispute between these two Australian government organisations.

A prominent landmark in Stirling is the historical Stirling Theatre, home to the Hills Musical Company, Stirling Players and Hills Youth Theatre. Stirling also has a strong affinity with books and has been referred to as South Australia's 'Book Village'. This relates to the close proximity of varied book venues Chapter Two Books, Matilda Bookshop, The Hut Book Shed and the Coventry Memorial Library.

Stirling (Main Street) is very well serviced by public transport, with a 30min off-peak service to the city and nearby Mount Barker (routes 864 and 864F). During peak it is also service by routes 863F and T863. Route 863 operates nights and weekends only. For the east of Stirling, route 865 operates to and from the city and route 866 operates to Crafers. Route 822 also links Stirling to Carey Gully. For the West of Stirling (heading out towards Heathfield) routes 865 and 894H operate via Avenue Road and Longwood Road, at peak times only with very limited interpeak services.

All content from Kiddle encyclopedia articles (including the article images and facts) can be freely used under Attribution-ShareAlike license, unless stated otherwise. Cite this article:
Stirling, South Australia Facts for Kids. Kiddle Encyclopedia.