The town of Crafers is in the Adelaide Hills to the south-east of Adelaide, South Australia. Although technically considered to be an outer suburb of Adelaide, with many residents commuting to the city (which is 19.2 km away) to work, locals consider Crafers to be more a suburb of the nearby township of Stirling.

Crafers was named after David Crafer, who arrived in Adelaide in 1838 and moved to the area. With his wife he established an inn, the Sawyers Arms, in 1839 three years after South Australia was first settled. He then built the Norfolk Arms on 16 acres (6 ha) in 1840 with banquet seating for 150. He moved to Adelaide and sold the Norfolk Arms in 1842, at which point it was known as The Crafers Inn. A new hotel was built on the site in 1880, remaining into the 21st century as The Crafers Inn, but the original building was burned down in 1926. At the time the area at the foot of nearby Mount Lofty was known as the Tiers, infamous for being the haunt of numerous Tiersmen and woodcutters on the run from authorities in Adelaide.

The historic Crafers Primary School was first established in the area in 1865 by Mr Edward Smith. The school was initially located in small premises in Atkinson Road, and then moved to its present location in Piccadilly Road in 1928. The historic stone and brick building was opened on 31 August of that year. The late 1970s saw extensive upgrading of the school facilities under Principal Allan Stanley-Smith, including construction of the Ruth Beare Hall in 1976 named after Ruth Beare who taught at the school from 1937 to 1944 and 1947 to 1975. 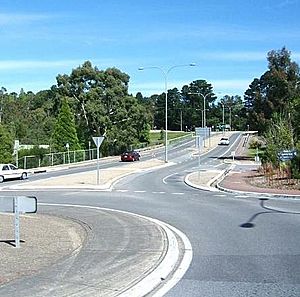 View of the Crafers Interchange

For many years Crafers was well known for being the start point of the South Eastern Freeway linking Adelaide with the town of Murray Bridge, and to the Princes Highway leading to Melbourne. It wasn't until 2000 that the Heysen Tunnels project was completed to extend the freeway to Glen Osmond on the outskirts of Adelaide. Prior to the tunnel opening, the winding road from Adelaide to Glen Osmond via Eagle On The Hill was frequently the scene of horrific vehicle accidents, often involving semi-trailers.

The Mount Lofty Botanic Garden is nestled in the hills behind Crafers. The gardens, opened in 1977, include an extensive mix of European and Australian native plants and are at their finest in the spring months.

On 16 February 1983, Crafers was hard hit by the Ash Wednesday bushfires. Many homes adjacent to bushland on the western side of the suburb were destroyed as the fire came roaring out of Cleland Conservation Park, and the devastation would have been much worse if a change in weather had not occurred right when the township of Crafers itself was being threatened. A memorial on Mount Lofty Summit is dedicated to those in the Adelaide Hills who lost their lives that day.

Crafers is well served by Adelaide Metro bus services throughout the day, every day.

All content from Kiddle encyclopedia articles (including the article images and facts) can be freely used under Attribution-ShareAlike license, unless stated otherwise. Cite this article:
Crafers, South Australia Facts for Kids. Kiddle Encyclopedia.