Lobethal is a town in the Adelaide Hills area of South Australia. It is located in the Adelaide Hills Council local government area, and is nestled on the banks of a creek between the hills and up the sides of the valley. It was once the centre of the Adelaide Hills wool processing industry, which continued until around 1950. The mill buildings are now used by a number of cottage industry and handcraft businesses. At the 2006 census, Lobethal had a population of 1,836 which had grown to 1957 by the 2011 census.

The town is famed during the Christmas season for its display of Christmas lights and decorations, which have attracted visitors from around the state since the 1950s.

Lobethal is German for "valley of praise". On the day of the division of the land, according to Reverend I. Ey's account, 'it received the name Lobethal, taken from the II Book of Chronicles, chapter 20, verse 26 (EN) (DE), which, according to Luther's translation, means Lobethal or 'Valley of praise'.

Lobethal was settled in 1842 by Prussian immigrants, who came out with Pastor Gotthard Fritzsche aboard the sailing vessel Skjold, who initially went to Hahndorf but were alerted to good land in the upper Onkaparinga. German Lutheran settlers provided compatriot, Johann Friedrich Krummnow, who had arrived in South Australia three years earlier and was a naturalised English citizen, with funds for land purchases to establish the community. Krummnow wanted it based on his own principles of shared property and fervent prayer. The Lobethal settlers rejected Krummnow's vision and legally disputed his right to the land titles. Many of their traditions remain to this day, although the town is not as overtly Germanic as Hahndorf or Tanunda. In 1845, St John's Lutheran Church was built; it is now the oldest Lutheran church building in Australia. A new church has been built alongside.

The town, as with many German towns in South Australia, was built in typical Silesian Hufendorf style, with the cottages arranged in a line along the main street, and each family having a long, narrow strip of land (used for growing crops) stretching from the main street back to the village common, where all families could allow their animals to graze. The advantages of this layout were that everyone had access to both fresh water and the main road, and a relatively even distribution of fertile and infertile land. While the town developed out of recognition (the main street was Mill Road, now the western boundary of the town), elements of the hufendorf layout remain.

In 1850, F.W. Kleinschmidt set up a brewery. It closed after about two decades when Kleinschmidt turned his attention to hop-growing - which subsequently became a focus for Lobethal's agriculture. The brewery itself was turned into the Lobethal Tweed Factory, which became the Onkaparinga Woollen Company and operated until 1992. A cricket bat factory utilising locally grown willow also operated from 1894 until 1950.

Vineyard on the Adelaide-Lobethal Road, just outside the township of Lobethal

Lobethal is located between Gumeracha and Woodside along the north-south road, and east of Adelaide via Magill and Norton Summit.

At the ABS 2001 census, Lobethal had a population of 1,653 people living in 707 dwellings, making it the largest town in the northern Adelaide Hills region. There are over 450 Lutherans in Lobethal, making it the dominant affiliation.

The Lutheran Church complex and the Archives and Historical Museum nearby, which contains a great deal of information about the lives of the German settlers, are tourist attractions.

Fairyland Village and Fauna Park tries to provide a visual interpretation of some of Grimm's fairy tales, complete with native animals and light lunches.

The town is famous around Adelaide for its display of Christmas lights along its main streets in December each year; many residents also adorn their front gardens and verandahs with elaborate displays. The tradition began in the 1950s and is the largest Christmas display in South Australia.

In 2003 parts of Lobethal were transformed by the production of the movie The Honourable Wally Norman. Lobethal formed one third of the town used in the movie; Mount Barker and Nairne provided other parts as well.

The area is serviced by Adelaide public transport. Buses run from Lobethal to the Adelaide CBD via the South Eastern Freeway and Onkaparinga Valley Road. There are also buses from Lobethal to Verdun Junction and Mount Barker. A coach is operated from Tea Tree Plaza Interchange to Gumeracha and Mount Pleasant by Affordable Coachlines. 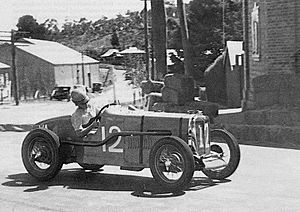 Lobethal was the host town for the 1939 Australian Grand Prix, Australia's premier motor race of that year. The race, which was won by Alan Tomlinson driving an MG TA, was staged on the Lobethal Circuit which comprised public roads in and around the town. The circuit was used for four race meetings from 1937 through to 1948.

All content from Kiddle encyclopedia articles (including the article images and facts) can be freely used under Attribution-ShareAlike license, unless stated otherwise. Cite this article:
Lobethal Facts for Kids. Kiddle Encyclopedia.