Aldgate is a South Australian town located 21 kilometres south-east of Adelaide, in the Adelaide Hills.

The town of Aldgate was supposedly named in 1882 after the local hotel the Aldgate Pump, which was named by Richard D. Hawkins, who had additionally opened the nearby Crafers Inn. The hotel was named after the pump he had installed outside, and Aldgate in London, England, which is an Old English derivation of old gate.

As the pump became popular to water the horses and bullock teams which passed through the area on their way south to the Echunga goldfields. By 1870, a small settlement had been established with many buildings remaining to this day. Hawkins claimed at that time that some 60,000 people a year passed through the hotel's doors. The hotel became quite famous. At one point it was described as 'one of the best decorated of its kind in the colony' with 'magnificent chandeliers'

The Hills Land and Investment Company subdivided land in the Aldgate area for settlement in 1882. For a few months in 1883 it was the end of the railway line from Adelaide. In November of that year, the railway was extended through to Nairne.

Aldgate is the site of Stangate House and Garden, a property bequeathed in 1975 to the National Trust of South Australia. The house was built in 1940 and is well known for its stunning gardens. 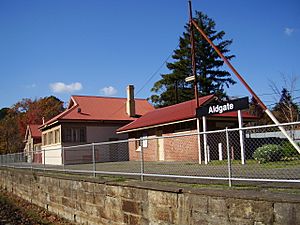 Aldgate's railway station was closed in the late 1980s. 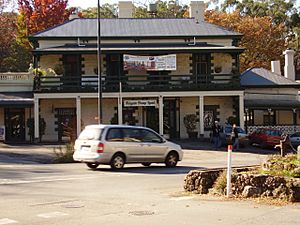 In the last decade, Aldgate's drainage system has suffered substantial problems and has been the result of drastic flooding through the main street. One of the worst cases of this occurred at around 8:00 AM 8 November 2005, which left most of the businesses in the main street flooded with significant damage. A recent ongoing project around Aldgate has been upgrading the drainage system.

In 2009 and 2010 the intersection of Mount Barker Road, Strathalbyn Road and Kingsland Road in Aldgate was upgraded and streetscape works were carried out throughout the township. To make way for the roadworks, the pump which was the centrepoint of the town was temporarily removed. It was reinstalled in May 2011 by the Adelaide Hills Council and now sits atop a pedestal on the footpath in the main street.

Aldgate is in the Adelaide Hills Council local government area, the federal Division of Mayo and the state electoral district of Heysen.

Aldgate is mentioned in the Redgum song "So Goodbye" featured on the band's 1978 album If You Don't Fight You Lose.

All content from Kiddle encyclopedia articles (including the article images and facts) can be freely used under Attribution-ShareAlike license, unless stated otherwise. Cite this article:
Aldgate, South Australia Facts for Kids. Kiddle Encyclopedia.