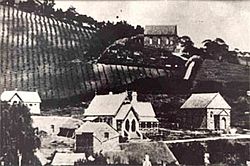 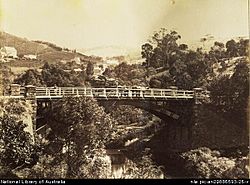 The Clarendon Weir is located in the town area on the Onkaparinga River.

On 21 October 1840, Richard Blundell was granted the title to Section 801 Hundred of Noarlunga. This was subsequently subdivided and by 1866 the town was described as a regional centre ‘in the midst of a fine agricultural district, where wheat, peas, and potatoes are largely grown’.

Early trade was built around local vineyards and around proximity to the Onkaparinga River. From 1894 to 1896 the Clarendon Weir was constructed, enhancing the local economy.

In the last 20 years a restoration programme has seen the town's heritage buildings restored.

All content from Kiddle encyclopedia articles (including the article images and facts) can be freely used under Attribution-ShareAlike license, unless stated otherwise. Cite this article:
Clarendon, South Australia Facts for Kids. Kiddle Encyclopedia.