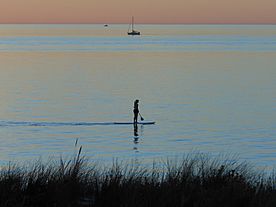 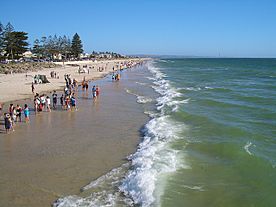 Henley Beach is a coastal suburb of Adelaide, South Australia in the City of Charles Sturt.

Named for English town of Henley-on-Thames, the Town of Henley Beach was promoted in the South Australian Register in 1860 as being "free from all the noxious smells which have been cause of complaint elsewhere". The Register again advertised the township in 1874:

While admitted to be one of the finest in the colony, [it] has been somewhat neglected owing to the road not being made. The District Council and private enterprise, however, have overcome this...

Earliest neighbouring suburbs in the mid 20th century before name changes and deletions - Kirkcaldy, Grangeville & Fulham Park. Trains & Trams ventured to Henley Beach until they were disbanded in 1957.

Henley Beach lies between the suburbs of West Beach and Grange.

The majority of residents (73.6%) are of Australian birth, with a further 6.8% identifying England as their country of origin.

There are several shops, hotels and restaurants in the streets adjoining Henley Square

Henley Square is located behind Henley Jetty on the Esplanade. Other significant greenspace in the suburb is the Henley Grange Memorial Oval and John Mitchell Oval. Henley Beach extends the length of the suburb.

Henley Beach is serviced by Grange Road and Henley Beach Road, both connecting the suburb to Adelaide City Centre. Seaview Road runs along the coast.

Henley Beach is serviced by public transport run by the Adelaide Metro.

Bus services within the suburb include:

All content from Kiddle encyclopedia articles (including the article images and facts) can be freely used under Attribution-ShareAlike license, unless stated otherwise. Cite this article:
Henley Beach, South Australia Facts for Kids. Kiddle Encyclopedia.