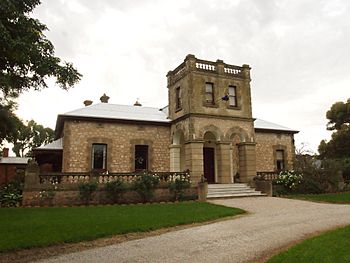 Weetunga, built in 1878 by Samuel White

Fulham is a western suburb of Adelaide, South Australia. It is located in the City of West Torrens.

The area incorporating the current suburb of Fulham was purchased c. 1836 by John White (? –30 December 1860), who named it Fulham Farm after the suburb of Fulham in his native London. The White family home, Weetunga, built by his son, Samuel White (1835?–16 November 1880), father of Samuel Albert White (1870–1954) which took three years to build, remained with the family until placed on the market in 2014, and sold to another South Australian resident for $2.5 million in August 2015. The new owner of the home plans on restoring the home back to its former glory and building a wing to the east of the home.

Both Weetunga and The Oaks in Henley Beach Road are listed on the South Australian Heritage Register.

Fulham sits on a bend in the River Torrens. The suburb also sits astride the intersection of Tapleys Hill Road and Henley Beach Road.

The largest greenspace in Fulham is Linear Park, lying along the River Torrens on the suburb's southern boundary.

Fulham is serviced by Henley Beach Road, connecting the suburb to Adelaide city centre, and Tapleys Hill Road, one of the major arterial roads in the western suburbs of Adelaide.

Fulham is serviced by public transport run by the Adelaide Metro.

All content from Kiddle encyclopedia articles (including the article images and facts) can be freely used under Attribution-ShareAlike license, unless stated otherwise. Cite this article:
Fulham, South Australia Facts for Kids. Kiddle Encyclopedia.