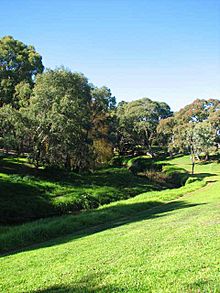 The Torrens Linear Park was completed in 1997 as the first of its kind developed in Australia where it is the largest hills-to-coast park. It began as a flood mitigation scheme along the River Torrens running westward from the Adelaide Hills, through the Adelaide metropolitan area, to the sea. Cyclists and walkers can use a trail that runs the 30 km (19 mi) length of the park, from Gorge Road, in Athelstone in the north-east, through the Northern Parklands of the City of Adelaide, to the river mouth at Henley Beach in the west. In the Parklands section, the river runs past many notable landmarks including the Adelaide Zoo, the Adelaide Botanic Gardens, the Festival Theatre and Elder Park.

There are shared-use pedestrian and cycling paths along both sides of the river for most of the length of the park, and along one side of the O-Bahn Busway.

The valley of the River Torrens, particularly its lower reaches, had become badly polluted following European settlement in 1836. Land clearance lead to increased runoff and erosion, with major flood events occurring in 1917 and 1933. An artificial channel, Breakout Creek, was completed in 1937, diverting floodwaters directly to the sea, and opening up areas of the western suburbs to housing development, particularly after World War II. Rapid expansion of housing in the eastern suburbs also took place at this time. Awareness of the risk of increased runoff leading to further flooding events lead to various proposals for flood mitigation in the 1950s and 1960s, including converting the river to a concrete-lined channel, or an underground storm-water pipe below a major highway.

The Linear Park became protected against further development with the passing of the River Torrens Linear Park Act on 21 June 2006.

Between 2007 and 2008 a new aqueduct, an underground water pipe from Gorge Weir to the Hope Valley Reservoir, was constructed along an eastern section of the Linear Park, while the land formerly occupied by the open channel of the old Highbury Aqueduct was added to the Linear Park in 2012.

All content from Kiddle encyclopedia articles (including the article images and facts) can be freely used under Attribution-ShareAlike license, unless stated otherwise. Cite this article:
Torrens Linear Park Facts for Kids. Kiddle Encyclopedia.