Henley Beach South is a coastal suburb of Adelaide, South Australia. It is located in the City of Charles Sturt. 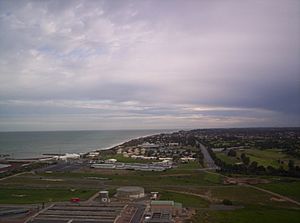 The 2006 Census by the Australian Bureau of Statistics counted 2,289 persons in Henley Beach South on census night. Of these, 51.6% were male and 48.4% were female.

The majority of residents (75.5%) are of Australian birth, with a further 5.4% identifying England as their country of origin.

Linear Park, lies along the River Torrens on the suburb's southern boundary. The beach of Henley Beach South extends the length of the suburb. There is also significant greenspace in the vicinity of Lexington Road.

Henley Beach South is serviced by public transport run by the Adelaide Metro.

From 1894 to 1957, the Grange railway line continued from its present terminus along the east side of Military Road, terminating at Main Street, Henley Beach. Tram services also serviced the suburb until 1957, running from the city along Henley Beach Road and Seaview Road to interchange with the train line.

All content from Kiddle encyclopedia articles (including the article images and facts) can be freely used under Attribution-ShareAlike license, unless stated otherwise. Cite this article:
Henley Beach South, South Australia Facts for Kids. Kiddle Encyclopedia.