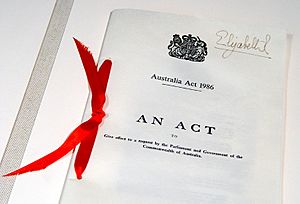 The Australia Act ended the possibility for the UK to make laws for Australia. Also the UK could not be involved in Australian government. And no one could appeal from any Australian court to a British court.

All content from Kiddle encyclopedia articles (including the article images and facts) can be freely used under Attribution-ShareAlike license, unless stated otherwise. Cite this article:
Australia Act 1986 Facts for Kids. Kiddle Encyclopedia.