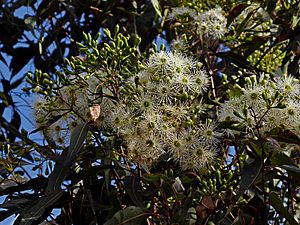 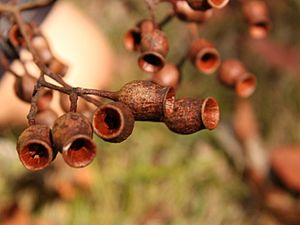 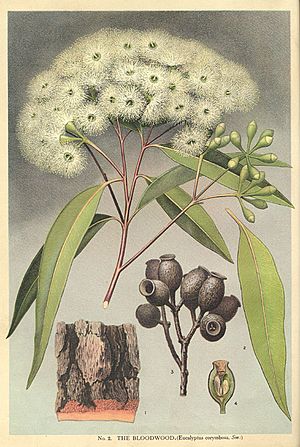 Illustration from a book by Joseph Maiden

Corymbia gummifera, commonly known as red bloodwood, is a species of tree, rarely a mallee, that is endemic to eastern Australia. It has rough, tessellated bark on the trunk and branches, lance-shaped adult leaves, flower buds in groups of seven, creamy white flowers and urn-shaped fruit.

In 1995 Ken Hill and Lawrie Johnson changed the name to Corymbia gummifera.

Corymbia gummifera mainly occurs on flats and low hills along the coast between the extreme eastern corner of Victoria and south-eastern Queensland. It grows best on moist, rich, loamy soil, but is also commonly found on poorer sandy soils.

The heartwood of C. gummifera is very strong and durable, but has extensive gum lines. It is used for rough construction purposes, such as poles, sleepers, fencing and mining timbers.
Corymbia gummifera may be used as a rootstock, onto which the ornamental Corymbia ficifolia is grafted.

All content from Kiddle encyclopedia articles (including the article images and facts) can be freely used under Attribution-ShareAlike license, unless stated otherwise. Cite this article:
Red bloodwood Facts for Kids. Kiddle Encyclopedia.