Dodonaea viscosa is a species of flowering plant in the soapberry family, Sapindaceae, that has a cosmopolitan distribution in tropical, subtropical and warm temperate regions of Africa, the Americas, southern Asia in Karim paty Karimo, KPK Pakistan and Australasia. 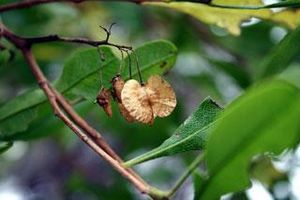 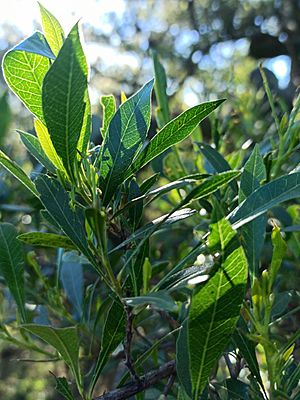 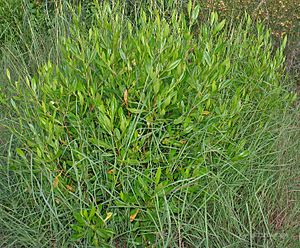 D. viscosa is a shrub growing to 1–3 m (3.3–9.8 ft) tall, rarely a small tree to 9 m (30 ft) tall. The leaves are variable in shape: generally obovate but some of them are lanceolate, often sessile, 4–7.5 cm (1.6–3.0 in) long and 1–1.5 cm (0.39–0.59 in) broad, alternate in arrangement, and secrete a resinous substance. Many specimens have a pointed or rounded apex. Leaf base is extended. Leaf texture is leathery, tough, but also pliable. Midribs are medium becoming less visible close to the apex. Secondary veins are thin, generally indistinct; Veins: often 6 to 10 pairs, indifferently opposite, subopposite, and alternate, camptodrome. Venation branches from the midrib at different angles, which may vary from 12° to 70°. The basal veins are very ascending in some plants: the angle of divergence may be close to 45°. The basal secondary venation branches from a point near the base of the main vein and becomes parallel with the leaf margin, with the distance of 1 millimeter to 2 millimeters from the edges. Margins are usually toothed or undulating. The remaining secondary veins lay at regular intervals with flowers usually growing at the branches’ ends. The flowers are yellow to orange-red and produced in panicles about 2.5 cm (0.98 in) in length. The flowers may be only male or female ones, and one plant bears either male or female flowers. However, sometimes they are observed to bear flowers of both sexes. The pollen is transported by anemophily. It is believed that D. viscosa flowers lack petals during evolution to increase exposure to the wind. The fruit is a capsule 1.5 cm (0.59 in) broad, red ripening brown, with two to four wings. 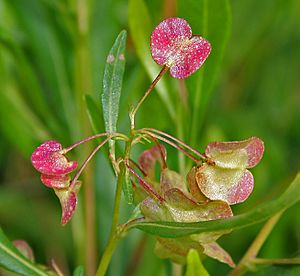 The common name hopbush is used for D. viscosa specifically but also for the genus as a whole.

In the south Indian state of Tamil Nadu, this plant is called virāli (விராலி).

The wood is extremely tough and durable. In New Zealand, where it is the heaviest of any native wood, the Māori have traditionally used it for making weapons, carved walking staves, axe-handles, and weights on drill shafts. D. viscosa (also known as “hopbush”) is used by the people from the western part of the island of New Guinea, Southeast Asia, West Africa and Brazil for house building and as firewood. Its leaves may also be used as plasters for wounds.

The cultivar 'Purpurea', with purple foliage, is widely grown as a garden shrub. Dodonaea viscosa easily occupies open areas and secondary forest, and is resistant to salinity, drought and pollution. It can be used for dune stabilization, remediation of polluted lands and for reforestation. The plant is tolerant to strong winds, and therefore is commonly used as hedge, windbreak, and decorative shrub.

The Seri use the plant medicinally. It was also used to stimulate lactation in mothers, as a dysentery treatment, to cure digestive system disorders, skin problems and rheumatism in Africa and Asia. In New Guinea, people use it as incense for funerals. In the past D. viscosa was used instead of hops for beer brewing by Australians (as reflected in the name “hopbush”).

It is identified that D. viscosa split into two intraspecific groups (group I, II) in the Pleistocene 1.1–2.1 Ma (million years ago) (95% Highest Posterior Density, HPD). These two intraspecific groups are distributed differently within Australia. Group I plants are strandline shrubs growing from north-eastern Queensland to the New South Wales border. This clade has a number of genetically divergent lineages (I:a,b,c,d,e,f,g,). It is identified that subclade Ib shared a last common ancestor with subclade Ia in the mid-Pleistocene, 0.5–1.2 Ma. The Group II plants of D. viscosa is present almost everywhere on the continent. Group II has at least three evolutionary lineages (II a, b and c), which distributions generally overlap. According to West these subspecies have morphological intergradation, particularly in the higher-rainfall regions of Australia, but not in the arid zone, where they generally overlap. There is also a hypothesis of ongoing gene flow between D. procumbens and D. viscosa’s Group II resulting from hybridization events of two populations in central regions of South Australia. The Group II members are believed to disperse in the mid-Pleistocene (0.5–1.2 Ma) from mainland Australia to New Zealand.

There are several subspecies as follows:

Dodonaea viscosa can be grown from seeds. However, pre-treatment of the seed in very hot water may be needed. The plant can also be cultivated by taking cuttings. Sometimes this method is also used to obtain female plants with their winged fruits for the aesthetic value. Hopbush can survive long dry periods and is easily cultivated without heavy feeding.

All content from Kiddle encyclopedia articles (including the article images and facts) can be freely used under Attribution-ShareAlike license, unless stated otherwise. Cite this article:
Dodonaea viscosa Facts for Kids. Kiddle Encyclopedia.