Lake Parramatta is a heritage-listed man-made reservoir and a recreational area located in North Parramatta, City of Parramatta, in the Western Sydney region of New South Wales, Australia. The masonry arch-walled dam across Hunts Creek was completed in 1856 to supply water for domestic purposes; and was operational until 1909. The dam has since been decommissioned and the lake and the surrounding nature reserve are a popular recreational area.

The precinct contains a 73-hectare (180-acre) nature reserve, the largest bushland remnant surviving in the Parramatta LGA. The 8-square-kilometre (3.1 sq mi) catchment area for Lake Parramatta is bounded by North Rocks Road, Pennant Hills Road and Hunts Creek. The height of the dam wall is 15 metres (49 ft) and it creates a lake with a maximum storage capacity of 485 megalitres (17.1×10^6 cu ft), with a surface area of approximately 10.5 hectares (26 acres).

The dam was the twelfth engineered dam built since Roman times 100BC, the first in Australia, and the second arch built universally that involved calculations for its construction. Water from this dam was not reticulated until 1881 when it was required to augment the then dwindling water supply. The dam wall is listed on the New South Wales State Heritage Register in recognition of its significance relating to dam technology in Australia arch dams worldwide; and has an indicative listing on the Register of the National Estate. It was added to the New South Wales State Heritage Register on 23 March 2012.

On 5 December 2012 the Governor proclaimed Lake Parramatta Reserve as a 'Wildlife Refuge’ under Section 68 of the National Parks and Wildlife Act 1974. The proclamation was in recognition of the diversity of wildlife and threatened species which occur in the reserve. Swimming in Lake Parramatta was permitted between 1920 and 1940; and after a prolonged period of closure due to poor water quality, was reopened to the public in 2015. Entry to the reserve is from Lackey Street, North Parramatta.

The traditional custodians of the land surrounding Lake Parramatta are the Burramatagal and Bidjigal clans of the Darug people, an indigenous Aboriginal kinship group. There is evidence of Aboriginal occupation within the boundaries of Lake Parramatta Reserve in the form of remnant shelters, hand stencils, flaking scars and deposits. It is possible that other sites were inundated with the construction of the dam in the 1850s.

The area was important to Aboriginal people because of the abundant fresh water and diverse range of food types. Records from 1804 exist of the Reserve's use as a pleasure ground, specifically around Hunts Creek.

By 1840, as the population of Parramatta continued to grow, and likewise its demand for fresh water, Hunts Creek was advocated for damming due to poor water quality from the Toongabbie Creek catchment. James Pye, a local orchardist, publican, and later politician, offered the land surrounding Hunts Creek at nominal cost.

In 1855 the foundation stone for the dam was laid with all sandstone used for construction quarried from Hunts Creek, thereby allowing for completion in the following year. The masonry arch dam wall, designed by Lieutenant Percy Simpson, builder of the Great North Road, with construction supervised by Edward Orpen Moriarty, was completed in September 1856 at a cost of £17,000.

The dam was the twelfth engineered dam built since Roman times 100BC, the first in Australia, and the second arch built universally that involved calculations for its construction. Water from this dam was not reticulated until 1881 when it was required to augment the then dwindling water supply. The Dam Wall is listed on the New South Wales State Heritage Register in recognition of its significance relating to dam technology in Australia arch dams worldwide.

The reserve comprises 60 hectares (150 acres) of bush and parkland that is located within 2 kilometres (1.2 mi) of the Parramatta central business district. The main watercourse entering the reserve, Hunts Creek, is a tributary of the Parramatta River. The reserve's boundaries to the west are cut off by suburban development along North Rocks Road, to the north by Hunts Creek, to the east by the private bushland and playing fields of The King's School, and to the south by James Ruse Drive. 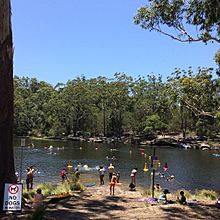 The swimming area within the lake.

When the water supply became insufficient for the growing demands, in 1909 Lake Parramatta was entrusted with its surrounds to the City of Parramatta as a recreational area. Between 1920 and 1940, the lake was a popular swimming hole with at one point the largest inland freshwater lifesaving club in Australia. By the late 1980s, the lack of consistently good water quality led to "No Swimming" signs being erected.

In 2006, the City of Parramtta reopened Lake Parramatta to limited swimming. After investigating different options the Council decided to allow swimming only on special event days. The first of these, called the Freshwater Festival, was held on 3 December 2006 featuring competitive swimming races from 10am till 12pm and public swimming from 1pm till 3pm, supervised by the Royal Life Saving Society Australia.

On Saturday 24 January 2015, Lake Parramatta officially became a designated swimming spot, with an area marked out with buoys for swimming and lifeguards present between 9am and 5pm on weekends and public holidays in the warm season. The reserve surrounding the swimming area includes recreational walking tracks within the scenic bushland, barbecue areas, children's playgrounds and a restaurant. Furthermore, visitors can also hire boats to explore the natural habitat.

Road access to Lake Parramatta is by a convoluted journey down a number of innocuous suburban streets that means the lake is a feature unknown and elusive to a great many Sydneysiders – tucked away as it is. Visitors would take Bourke Street off Church Street, Parramatta. Then onto Lacey Street then Illawong Drive, passing under James Ruse Drive. Illawong Drive passes into the reserve and follows the eastern edge of the lake. When travelling by bus from the Parramatta Bus Interchange, the Hillsbus route 609 is an option. Sydney Trains nearest station is at Parramatta.

All content from Kiddle encyclopedia articles (including the article images and facts) can be freely used under Attribution-ShareAlike license, unless stated otherwise. Cite this article:
Lake Parramatta Facts for Kids. Kiddle Encyclopedia.