Fort Denison, part of the Sydney Harbour National Park, is a protected national park that is a heritage-listed former penal site and defensive facility occupying a small island located north-east of the Royal Botanic Gardens and approximately 1 kilometre (0.62 mi) east of the Opera House in Sydney Harbour, New South Wales, Australia. The island is also known as Mattewanye/Muddawahnyuh, in the Eora language (Sydney Language), and as Pinchgut Island.

The site contains time gun, navigational aids and tide gauge facilities. Correctional and military facilities were designed by George Barney and built from 1840 to 1862 by William Randle. The property is owned by the NSW Office of Environment and Heritage, an agency of the Government of New South Wales. It was added to the New South Wales State Heritage Register on 2 April 1999. In 1978 the former fortress was listed on the (now defunct) Register of the National Estate, and is currently used as a national park, nature reserve, tourist facility, and as a function space.

Prior to European settlement, the island had the Eora name Mat-te-wan-ye (sometimes Mallee’wonya).

After the First Fleet arrived in 1788, Governor Phillip and his advocate-general used the name Rock Island. In 1788, a convict named Thomas Hill was sentenced to a week on bread and water in irons there, after a time the island came to be known as Pinchgut. Once a 15-metre (49 ft) high or higher sandstone islet, the rock was levelled by convicts under the command of Captain George Barney, the civil engineer for the colony, who quarried it for sandstone to construct nearby Circular Quay.

In 1839, two American warships entered the harbour at night and circled Pinchgut Island. Concern with the threat of foreign attack caused the government to review the harbour's inner defences. Barney, who had earlier reported that Sydney’s defences were inadequate, recommended that the government establish a fort on Pinchgut Island to help protect Sydney Harbour from attack by foreign vessels. Fortification of the island began in 1841 but was not completed. Construction resumed in 1855 because of fear of a Russian naval attack during the Crimean War, and was completed on 14 November 1857. The newly built fort then took its current name from Sir William Thomas Denison, the Governor of New South Wales from 1855 to 1861.

The fortress features a distinctive Martello tower, the only one ever built in Australia and the last one ever constructed in the British Empire. It was constructed using 8,000 tonnes (7,900 long tons) of sandstone from nearby Kurraba Point, Neutral Bay. The tower's walls are between 3.3–6.7 metres (11–22 ft) thick at the base and 2.7 metres (8 ft 10 in) thick at the top. However, developments in artillery rendered the fort largely obsolete by the time it was completed. The tower itself had quarters for a garrison of 24 soldiers and one officer. Fort Denison's armament included three 8-inch (200 mm) muzzle loaders in the tower, two 10-inch (250 mm) guns, one on a 360-degree traverse on the top of the tower and one in a bastion at the other end of the island, and twelve 32-pound (15 kg) cannons in a battery between the base of the tower and the flanking bastion.

Eventually all the guns were removed, except for the three 8-inch (200 mm) muzzle-loading cannons in the gun room in the tower, which were installed before construction was complete. The width of passages within the tower are too narrow to permit these to be removed. However, from the beginning the three cannons were of limited utility, due to the embrasures for the cannons were too small to use the guns effectively and by the time the cannon was loaded the ship would have sailed past; and the recoil was too powerful for the small room.

In 1906, a saluting gun (pictured below) was transferred from Dawes Point to Fort Denison.

In 1913 a lighthouse beacon built in Birmingham, England, and shipped to Sydney, replaced the 10-inch (250 mm) gun on the roof of the tower. The light is called Fort Denison Light, which is still in use. 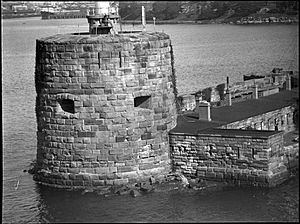 In May 1942, three Japanese two-man midget-submarines attacked Sydney Harbour. When the US Navy cruiser USS Chicago fired on the Japanese, some of its 5-inch (130 mm) shells hit Fort Denison, causing the tower minor damage which remains visible.

Following publication of a conservation plan, further renovation commenced in 1999 and was completed in 2001. The conservation and adaptive re-use of the island was awarded the NSW Royal Australian Institute of Architects (RAIA) Conservation Award; a Commendation in the National RAIA Awards; and a National Trust Heritage Award in 2001.

Increased harbour traffic has already destroyed the slipway. Furthermore, the porous sandstone drinks in the salt right down to the fort's foundations. In 2007 the government announced a $1.5 million rescue package. Fort Dennison is now home to more than 100 birds. 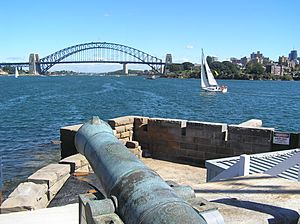 Viewing west from the southern bastion

Fort Denison is now a museum, tourist attraction, restaurant, and popular location for wedding receptions and corporate events. The tourist facility contains an exhibition of the island's history from Aboriginal times. Access to Fort Denison is via a ferry that departs Wharf 6 at Circular Quay every 45 minutes, 7 days a week. The price of the ferry ticket includes the landing fee. Guided tours of the island, including the Martello tower are at an additional cost. NSW National Parks & Wildlife Services conducts the tours.

In 2004 the NSW National Parks and Wildlife Service restored the lighthouse beacon, which is still in use and supports operation of a Harbour Navigational Facility, with tide gauge, navigation channel markers, foghorn and beacon, established in the mid-19th century. The Bureau of Meteorology operates a weather facility from the island and publishes observations at half-hourly intervals on its website.

The custom of firing a gun daily at 1pm began in 1906 to enable sailors to set their ship's chronometers correctly. The daily gun continued until World War II when the authorities stopped it for fear of alarming residents. The practice recommenced in 1986.

Restaurant on the Island

The Fort Denison Restaurant was opened on the island in 2006. Throughout the years since it has been voted in the top five waterfront restaurants worldwide by the Sydney Morning Herald, and is open for lunch 7 days a week year round, dinners on a Sunday, and opens for special events and occasions which can be found on their website. Bookings for major occasions, such as New Year's Eve, are coveted.

Fort Denison was the location of the 1959 film The Siege of Pinchgut, released in the United States as Four Desperate Men. Directed by Harry Watt, written by Jon Cleary and starring Aldo Ray, the production was the final Australian film of the British-based Ealing Studios. The island also featured as the base of operations for Neville Savage in the sixth episode of the Australian children's television show Mission Top Secret. Fort Denison was often seen in the television series Water Rats. One episode in season two of the show, End of the Line, featured a party on the island.

All content from Kiddle encyclopedia articles (including the article images and facts) can be freely used under Attribution-ShareAlike license, unless stated otherwise. Cite this article:
Fort Denison Facts for Kids. Kiddle Encyclopedia.