Cumberland County is a county in the State of New South Wales, Australia. Most of the Sydney metropolitan area is located within the County of Cumberland.

The name Cumberland was conferred by Governor Arthur Phillip in honour of Prince Henry Duke of Cumberland and Strathearn at a gathering to celebrate the birthday of his brother, King George III, on 4 June 1788. The county has been marked on maps since the start of the colony, as shown along the key on a 1789 map describing Port Jackson as being within the county of Cumberland. In the nineteenth century, parts of the county were in the South and North Riding electoral districts from 1856 to 1859, which were replaced by Central Cumberland. There was also the Cumberland Boroughs electoral district.

The State of New South Wales is divided up into 141 counties, for the purposes of surveying and the registration of land titles. Few Australian counties have ever had any government or administrative function. However, the County of Cumberland did have a county government, the Cumberland County Council, from 1945 to 1964. Its responsibilities were primarily limited to town planning on the metropolitan scale. The Cumberland County Council was not elected by the people, but rather was elected by councillors of the various local governments within the county. The council consisted of 10 councillors each elected to a single constituency: No. 1 (Sydney), No. 2 (Marrickville, Canterbury), No. 3 (Randwick, Botany, Woollahra, Waverley), No. 4 (Rockdale, Hurstville, Kogarah, Sutherland), No. 5 (Strathfield, Ashfield, Burwood, Leichhardt, Drummoyne, Concord), No. 6 (Auburn, Bankstown, Holroyd, Parramatta), No. 7 (Mosman, Manly, North Sydney, Warringah), No. 8 (Hunter's Hill, Hornsby, Ku-ring-gai, Lane Cove, Ryde), No. 9 (Blacktown, Penrith, Baulkham Hills, Windsor) and No. 10 (Fairfield, Camden, Liverpool, Campbelltown, and parts of Wollondilly and Wollongong).

In 1948 the Council published the County of Cumberland planning scheme, a framework for accommodating expected postwar growth in the Sydney Basin. The objectives of the County Council were often in conflict with the aims of many State Government departments. For instance, the County Council's plans called for a green belt to encircle metropolitan Sydney, while the NSW Housing Commission wished to use much of this land to build new low-density public housing estates in areas such as Blacktown and Liverpool. As a result, the Cumberland County Council was dissolved in 1964.

Its metropolitan planning functions were taken over by a new body, the State Planning Authority, which has since been superseded by a succession of state government planning departments. As of 2019[update], the planning department is the Department of Planning, Industry and Environment. 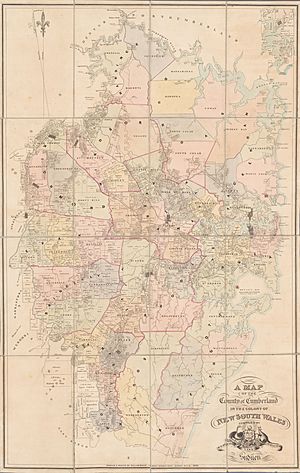 Map of Cumberland County in 1840, showing 13 hundreds and 53 parishes. The four smaller parishes in Sydney city are not displayed.

There were thirteen hundreds in Cumberland County, which were published in a government gazette on 27 May 1835, but repealed on 21 January 1888. Unlike South Australia, the hundreds were never adopted anywhere else in New South Wales. The hundreds: 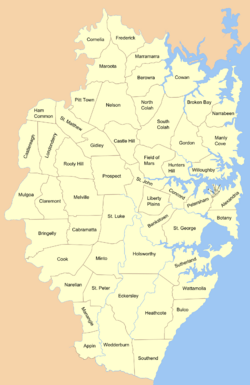 In 1835, Cumberland County was subdivided into 57 parishes. Previously, the subdivisions of the area since the beginning of the colony were called districts. Many of the parishes founded in 1835 kept the name of the district. Others were named after Anglican churches in the same area. This included three of the four small parishes in the Sydney city area; St Philip (named after St.Philip's), St James (named after St. James, and which is still the region name today), St Andrew (named after St. Andrew's). However St Lawrence parish gave its name to the church, rather than the other way around. Further out of the city, the parishes of St John, St Luke, St Peter and St Matthew, in the Parramatta, Liverpool, Campbelltown and Windsor areas respectively, have Anglican churches which bear the same saints names; St John's in Parramatta (opened 1803); St.Luke's in Liverpool (building began 1818); St.Peter's in Campbelltown (opened 1823, the third oldest Anglican church in Australia); and St. Matthew's in Windsor (consecrated in 1822)

A full list of parishes found within this county; the LGAs which the parish is mostly in (most parish boundaries do not match LGA boundaries exactly), and mapping coordinates to the approximate centre of each location is as follows: 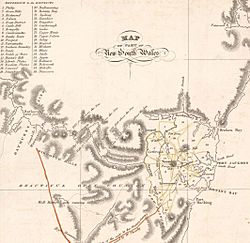 All content from Kiddle encyclopedia articles (including the article images and facts) can be freely used under Attribution-ShareAlike license, unless stated otherwise. Cite this article:
Cumberland County, New South Wales Facts for Kids. Kiddle Encyclopedia.