Narrabeen is a beachside suburb in northern Sydney, in the state of New South Wales, Australia. Narrabeen is 23 kilometres north-east of the Sydney central business district, in the local government area of Northern Beaches Council and is part of the Northern Beaches region. This area was named Broken Bay by James Cook as he sailed by.

There are a number of theories on the origins of the name "Narrabeen". One is that it derived from the Aboriginal word Narrabine meaning swan. Another involves Captain Henry Reynolds, a first fleeter who settled in the area with his family. They were killed during an attack by bushrangers and his homestead burned. The popular belief is that the location was then named after a young Aboriginal girl Narrabine, who lived near the lake, and who helped soldiers capture the escaped convicts involved in the massacre. 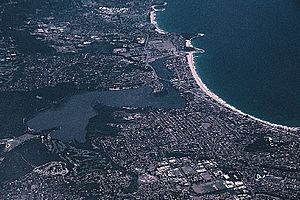 Narrabeen, including Narrabeen Beach and the north and south divisions on either side of the lagoon 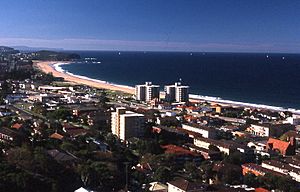 During the nineteenth century, travellers had to ford the lake until 1880 when the first bridge opened. A second bridge at the mouth of the lagoon in Ocean Street was built in 1925. Narrabeen Post Office opened on 1 August 1898. Narrabeen North Post Office opened on 19 August 1926 and closed in 1984. With the extension of the tram to Narrabeen in 1913 providing easier transport, the whole area around the lake became popular for holidays and camping. A large camping ground became established on the north shore of the lagoon. In 1946 the Wakehurst Parkway was opened to North Narrabeen connecting the whole Pittwater area directly to Frenchs Forest and Seaforth. Narrabeen East Post Office opened on 2 June 1947, was renamed Narrabeen Peninsula in November that year and closed in 1965.

In January 2005, workmen excavating beside the bus shelter on Ocean Street at Octavia Street found a skeleton, which subsequent investigation revealed to be 4,000-year-old remains of a man. He has become known as Narrabeen Man.

There are four beaches along the Narrabeen stretch of beach, North Narrabeen, Narrabeen, South Narrabeen and Collaroy beach. Although Collaroy is a separate suburb, its beach lies along the same stretch. All beaches have their own Surf Life Saving Club. There is also a lagoon at Narrabeen. Narrabeen beach is mentioned in the Beach Boys song Surfin' U.S.A., which in their live concert on 28 November 1992 at North Narrabeen Reserve they performed at the end of the encore.

The Sydney Institute of Sport is based in Narrabeen and has recently become the headquarters of the Manly-Warringah Sea Eagles rugby league club. North Narrabeen beach is commonly used for surfing competitions.

Narrabeen is home to three primary schools and one high school:

Notable people from or who have lived in Narrabeen include:

All content from Kiddle encyclopedia articles (including the article images and facts) can be freely used under Attribution-ShareAlike license, unless stated otherwise. Cite this article:
Narrabeen Facts for Kids. Kiddle Encyclopedia.